There's a first time for everything 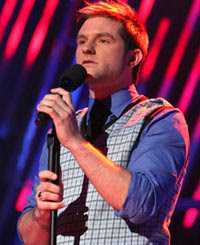 I have never once blogged about American Idol - well, that's not entirely true because I did blog my complete and utter surprise at how much Taylor Hicks' CD totally surpassed my incredibly low expectations, but I have never blogged the actual show at all, which is amazing because it seems like all my blog friends watch it religiously. I mostly can't be bothered to remember that it's on, but thanks to Yuri who posted Blake Lewis' performance of "Mack The Knife" a while back, I took more than a passing interest in Idol this season. I have decided that it is not a sad thing that I have all of Blake's mp3s from this season - while he's certainly not the most vocally gifted contestant on the show this year, there's more to the performance than just the vocals (as this fan of Madonna's live shows knows.)

Anyway, I ACTUALLY WATCHED THE LAST 20 MINUTES OF THE FINALE tonight. I know, I can hardly believe it either. Mostly, I can't believe that I remembered it was on. In any event, as everyone knows by now, Blake did not win. But really, I think that will serve him well. Jordin Sparks might have been a more powerful singer, but Blake is the better pop star, which really, in my world is all that matters. And he also won't be subject to the years and years of Idol slavery that the winners seem to have to endure. Finally, wasn't coming in second the best thing that ever happened to Clay Aiken. (And before you ask, yes, I have Clay's debut and yes, it's better than it has any right being - and my sister agrees with me on this point.)

I look forward to buying Blake's CD when it comes out, which we all know it will. I'm sure that he'll land a record deal before the week's out and hopefully, he'll get to work on an album before all that much longer. And at least I won't have to worry about that truly dreadful "This Is My Now" being on there.

(PS - can I just say how glad I am that Blogger automatically saves drafts now?! I nearly lost this by inadvertantly navigating away from the page - in the old days, I'd have had to recreate it but not this time!)
Posted by Dan at 5/23/2007 09:20:00 PM

YAY Blake didn't win! I really think that's the best course for the pop-star (I'm gonna start calling him that) right now. I totally agree--he's not the vocalist Jordin is, but he sure blew away the competition based on his arrangements and his originality!

(ps. i'm glad somebody's been watching some of those youtube vids i've been posting! ) :)

Dan.. BC here..Glendale Square which is a stones throw from my house and is home of Jordin Sparks erupted in a mushroom cloud of cheering..people in the grocery store and the workers are all wearing Jordin Sparks T-shirts..what do you expect..sweet hometown girl makes good..i did not like the parts of the finally when they gave awards to untalanted people who had been on the show..seemed sophmoric and cruel..my russki wife agreed..My personal favorite is Chris Daughtry...anyone who would take on the 1991 Queen opus "Innuendo" has balls. He has done really well and i admire that he goes his own way...and let me say this Kelly clarkson needs to seriously put a Karen Carpender before her record company moves and doesn't tell her where they are going..she is fat as hell..i mean Jordin is big but Clarksons muffin tops are not gonna cut it...seacrest out.

um, yes, don't really know how to follow that :P haha. I am really glad Blake didn't win, as we all know it doesn't really matter if you win or place in this competition. I look forward to an album and agree that he has totally piqued my interest again in Idol as a series (though i continue to worship xfactor)