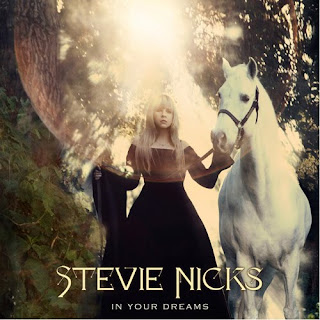 To paraphrase a bit from Evita, it is my sad duty to inform you that, while I like Stevie Nicks' new album, In Your Dreams, I don't love it. As a long time Stevie fan, this is hard to admit but it really is true. And because I don't love it, it is ultimately disappointing because it has been 10 years since her last solo album, Trouble In Shangri-La. It doesn't seem like In Your Dreams was worth the wait.

That said, it's about 65% a good album, 25% so-so and 10% pure awful. I really love "Secret Love" and it's gotten a lot of plays on my iPod. The fact that it's from the vault helps its cause. This was back when Stevie could write down practically anything and turn it into a song. I'm not so sure that happens like it used to. I can see the wheels turning on some of the newer songs. The bloom seems to be off the songwriting rose. Still, newer songs like "For What It's Worth" (not written by Stevie), "New Orleans" and the title track really do appeal to the Stevie fan in me. "Annabel Lee" may not be "Planets of the Universe", but it's still a very strong song. Even the song inspired by the Twilight series is pretty strong - you just have to forget the fact that it's inspired by the Twilight series. In fact, the first 7 songs are so strong, I think if Stevie had stopped there and called it an EP, she would have had something at least as good as The Wild Heart. (Sorry, nothing touches Bella Donna.)

But then there's track 8 - "Soldier's Angel" - which is so amazingly bad I am still trying to figure out what went wrong. Lindsey Buckingham is on guitar and background vocals, but the lyrics are so bad and the production so sparse that it grates from the first note to the last. How could the combination that cranked out some of the most memorable pop hits of the 70s produce something so dreary and unlistenable? The world may never know. What makes its substandardness even harder to swallow is that Stevie is apparently in love with it.

Even the worst track on BuckinghamNicks is better than this song.

The album has a few more high points - "Ghosts Are Gone" gets points for recycling "ghost through a fog" which is one of my favorite recurring Stevie-isms and "Italian Summer" is worthy as well, even though it took a while to grow on me. The rest is not bad, it's just not very memorable which I think, is really bad if you're a Stevie Nicks song.

I think the biggest culprit for this album's lack of spark and life lies solely with the production. As my friend and fellow Stevie-phile Steve Sears says, Dave Stewart and Glen Ballard produced a version of Stevie that will appeal to a wide and older audience, and in so doing, they lost the craziness that makes Nicks so appealing to long term fans. I miss the quirks that have made even bad Stevie albums endearing. For as much as I can barely stomach Street Angel, it still contains the eccentricities that make Stevie Stevie. It's almost as if Stewart and Ballard took sandpaper to Stevie's rough edges and smoothed them over for mass consumption that I don't think is likely to happen anyway.

I think that ultimately, it's hard when your producing any piece of art. It's hard to predict what people want - will they want something new or will they want the same old thing all wrapped up in a new package? Waiting 10 years between releasing new material ups the ante significantly. I also think that part of it is me - the music is good but it's not really where my mood is right now. Perhaps I will warm to it when the leaves change color and the temperatures turn cooler, versus now when summer is just getting underway and we're 10 days away from seeing Kylie Minogue.

It is still new music from Stevie Nicks who was one of my original music loves and for that, I will be grateful, even if it's not quite what I wanted.