Today has been a watershed day for Anna. As I got into the car after work tonight (Heidi and Anna came to pick me up), Heidi said that Anna had an announcement. That announcement was " I HAVE A LOOSE TOOTH." And she does. One of her bottom center teeth is loose - quite loose, actually - and this is a big thing for Anna. It was kind of hurting the other day and we asked her if she thought it was loose, but she said it wasn't. But today it is. She is alternately weirded out by it and excited by the prospect of money for a lost tooth.

She's growing up, that's for certain. A loose tooth is another of those inevitable rites of passage. Funny how I hardly remember any of mine.

And then tonight, we followed my dad's lead and went out hunting for lightning bugs (aka fireflies) in the front yard. They did this while Heidi and I were in Chicago last week, and she's been asking me for several days to do this. Well, tonight it just worked out that the weather was decent and I wasn't exhausted from work. They were everywhere, I tell ya - although it seems like there were more of them when I was a kid. Whether that's scientifically quanitifiable or just memories from my childhood playing tricks on me I'm not certain. Predictably, she wanted me to catch them and put them in her hand, but the bugphobe in her quickly tired of that.

Chasing fireflies with my daughter reminded me of the simpler things in life. I know it seems trite, but it's true. Watching them flash was so wondrous to her, and watching her watch them with such a fresh perspective was amazing to me. Of course, after we were done, she wanted to know what a baby firefly looked like. We did a quick Google search and found this. And in so doing, I found my new desktop wallpaper. 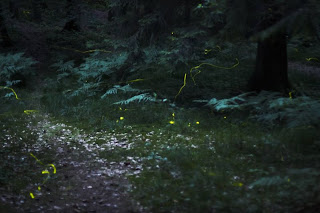 Yes, the memory of doing this brings back such a specific mood and time. Usually I think of heat and the sort of casualness of being a kid. The sound of crickets at night, etc. Le sigh!

Congrats on the tooth! My neighbor used to pull them for me- isn't that odd. She was an older lady and she would cover my eyes with one hand, put a kleenex on her other hand and pull the tooth. Then she'd give me a cool candle b/c she worked at Wicks'n'sticks at the mall! (We're talkin' 1975-6 here!) For years I kept one that looked like a lightbulb. I'll be she is dead now, sweet lady. Mrs. Shelander.