Not too long from now, those lucky Madge fans in England (Paul and John included!) will be seeing the opening night performance of Madonna's Sticky & Sweet Tour. I'm a bit torn on the viewing of images and video from the tour as it does ruin the surprise a bit, but in the internet age it's almost impossible not to see and read things. But this was one of the first things I saw when I logged on to my e-mail this morning! 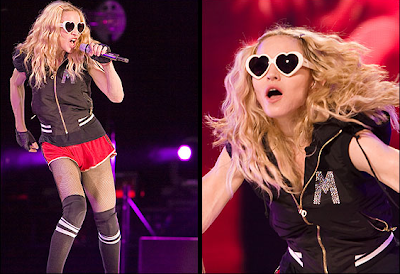 This appears to be from the Old-School section of the show (?) and I approve! In 2 months, it'll be me at the tour and that day cannot come soon enough.

Here's the set list, for those of you who haven't read it (and aren't uber-Madge fans.) It is still "a rumored track list" at this point, but I would bet cash that this is what we wind up with.

It does look good, although I am so seriously tired of "La Isla Bonita" and "Ray Of Light." I suspect that she keeps on doing "Ray Of Light" because she likes playing the guitar, but we'll see. And I do think the biggest WTF moment is "You Must Love Me" from Evita, but it still doesn't top the ultimate WTF moment that was "I'm Going Bananas" on The Girlie Show.

I'm more confused by "Music." I mean, enough is enough, no?

And at least Bananas was a little bit of fun though. YMLM sticks out though like a very sore thumb amongst that setlist, Bananas sort of made some sense...