I'm on a ride and I wanna get off

The ads for Adventureland (located in Altoona, IA) used to say (and probably still do): Just one price is all you'll ever pay! That's the hook they use to get you in the door, only to milk you dry for the rest of the day. Like fools, we continue to go year after year. Part of the reason that we continue to do it is because my work provides us with heavily discounted tickets - a full 50%+ off the price of an adult admission and 10 bucks off a kid's admission. At prices like that, you really can't say no.

As a kid, the day we went to Adventureland was as eagerly anticipated as Christmas. I never actually went to Adventureland until I was in 6th grade, although I had been to plenty of county fairs, pay-as-you-go amusment parks (most notably Arnold's Park in, naturally, Arnold's Park, IA) and, of course, the Iowa State Fair. But the concept of paying to get in to the amusement park and then being able to ride till you puked was completely lost on me. My grandfather bought everyone in the family tickets year after year and, like clockwork, we would all trek to Adventureland, usually in mid-to-late June. It was a bit of a de facto family reunion, but make no mistake -- all of us cousins were there for the rides.

It's really not all that much to write home about, especially if you've been to places like Six Flags Great America or Disney World or Knott's Berry Farm. But by Iowa standards, it's a pretty big deal. According to their website, they are the #1 tourist attraction in Iowa, which is kind of like saying I'm the #1 oldest person living in our house. Not exactly much competition. But the thing that is cool about Adventureland is that there is oddly comforting when you go, year after year, to ride the same rides and eat the same crappy food. It even smells the same.

Anyway, as you might predict, Anna just loves the place. She's a ride kid through and through and each year gets a little braver. Although she stuck with a lot of her tried and trues (the Tea Cups and the Balloon Races being perennial favorites), she also bit the bullet and got on the Falling Star (a big thumbs down from Anna who cried on the ride) but declined to ride the Galleon or the Silly Silo. Here she is on the Tea Cups (I was riding with her.) 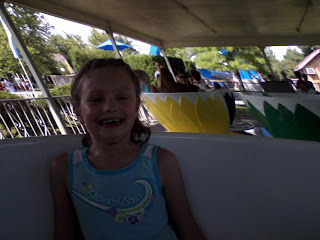 However, the biggest thumbs down came for Adventureland's newest attraction, Kokomo Kove. It is bad enough that they are using that wretched late 80s Beach Boys song in their ad campaign for it, but nothing could have prepared us for the annoyance and aggravation that was the experience of Kokomo Kove. Anna had seen commercials for it on TV and was very eager to try it out. Being the sport that I am, I was willing to go in with her. We changed into our suits and headed over while Heidi grabbed a lounge chair.

I should have known that the experience would be bad when I got over there and the place smelled like a chemistry lab. Seriously, it was so chlorinated, there's no way anything was growing in there. It made you wonder if the area had been built on a phosgene disposal site. The bad part about chlorine is that there's a fine line between keeping the pool clean and poisoning the park guests. They were just slightly over that line. Almost instantly, my eyes started stinging. Anna's were not long to follow, although she thought it was sunscreen in her eyes. Before long, she was crying and torn between wanting to be in the water but wanting to get away from the chlorine. Add to this is the random dumping of water on you from above. I have never been a fan of that kind of shit - let me control the degree to which I want to get wet thankyouverymuch - but this was beyond anything I'd ever witnessed. There is a large "Kokomo Kove" bucket that dumps a shitload of water all over the place with little or no warning. Now maybe that's fun for kids, but I didn't like it and neither did Anna. After a very brief attempt, we found ourselves drying off and headed for other, less toxic rides.

This year, I found myself riding even less than I have in previous years. I am fond of saying that I am about 2-3 years away from having to wait in the car while everyone else goes in and rides rides. I can no longer ride the rides that go in circles. My father maintains it is because, as we age, our internal organs are held less firmly in place than they are when we're younger. I can buy that, because I literally can't ride the Balloon Races without feeling nauseous. And you can forget the Tilt A Whirl. Sadly, this year may very well have marked the last time I am able to ride my most favorite Adventureland ride, the Sidewinder. Witness: (not my video)

I love it, but I felt ill after riding it this year. And I'm not one of those people that will endure nausea and the potential for puking in the nearest trash can just to say "I can still ride that!"

And no trip to Adventureland is complete without funnel cake. There's nothing like fried pancake like batter covered with powdered sugar for finishing off your day. Here's Anna licking the plate. 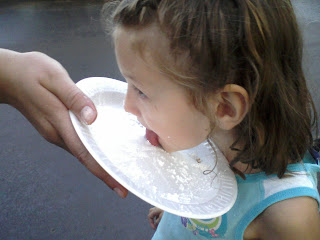 All in all, it was a good day. We probably will go again when my work sells off the remaining Adventureland tickets for 5 bucks a piece in September. We'll see - one trip might be all I have in me this year. But if we get to see DOLLY PARTON at Adventureland again, it might be worth it. 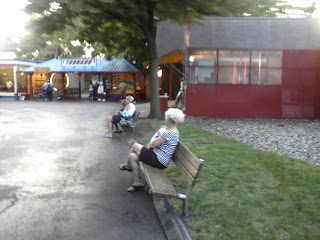 I'm such a stalker.

(There was also a guy at the park that I saw three times wearing a Floppy T-shirt. I so wanted to go up to him and ask him where he got it, but figured that would be weird. I loved that show as a kid! Looks like I might have to pay a visit to the State Hysterical Historical Building to score one.)
Posted by Dan at 8/17/2008 12:00:00 PM

How weird! I went to Alton Towers this weekend which sounds kind of similar, which is also a total rip off (it burns my grits when you have to pay for parking! Like i would drive all the way there to park and then run back the 4 miles to the nearest attraction! As if!) but i bought a box of sugar puffs which had a 2 for 1 adult admission offer so darren and I saved £35 ($70!!!!!!) though had to live with the indignity of our tickets stating "SUGARPUFF" all day. You and Heidi would've loved ;)

OMG - I LOVE the Falling Star - can't believe that ride still exists. I think I rode it seven times in one night way back when. Also, there's a T-shirt shop in the East Village that sells those Floppy shirts, too. Just FYI... although that's like a block from the State Historical Building so just about exactly as (in)convenient for you. ;-)

I think the store in East Village is called Panarama Casual. It is at 422 E. Locust Street. They have unique screenprints.