It didn't make a sound

We had a doozy of a storm blow through on Monday around noon. Because I work in a windowless room, I had no idea that it even happened until it was over. Heidi was out and about with Marie Sexton during it, but when I asked her about it, she didn't really remember anything spectacular. Anna was at her two-week long class at the middle school (NOT summer school, I'm sure she would point out.) So no one was home.

The other night, our neighbor came by and mentioned to us that it must have been a heck of a storm. I asked her if she lost anything and her reply was no, nothing but the branch on your maple tree. WHAT? I followed her out to her back yard and, sure enough, this was the scene that greeted me. 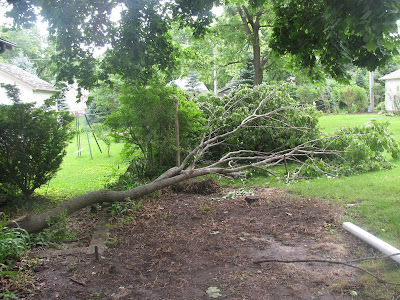 While we marveled at the fact that it miraculously missed her house, I was faced with the fact that yes, it was my responsibility to clean it up. I cannot be trusted with a chain saw, so I did what I always do. I called my dad. So in a few hours, he'll be on his way over with a chain saw and we'll get that sucker chopped up.

I'm still kind of amazed that it took someone pointing out to me that we'd just lost a major chunk of tree. I chalk it up to life being so busy that I (naturally) haven't mowed the yard in about 10 days and so I've really had no reason to go out back. Also, between her yard and ours is a large row of bushes about 6-8 feet tall, so our view of her backyard is blocked.

A little bit embarrassing, but hey, what's life without something to shock you out of your complacency every now and then. But clearly, if a branch falls in my yard and no one's around, it doesn't make a sound.

A few more pictures - my dad asked me on the phone the other night if I could drag it out of her yard. Um, not without the help of a superhero. 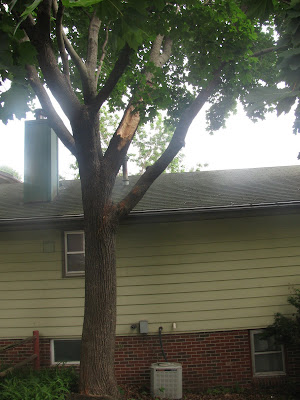 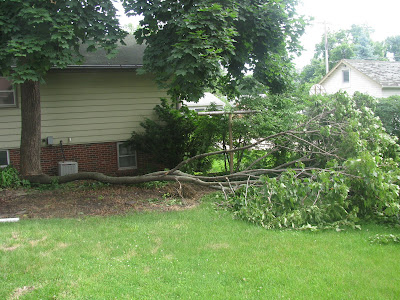 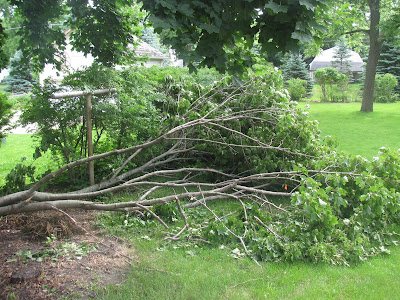