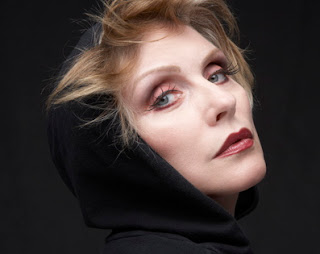 The new Debbie Harry album Necessary Evil is finally loaded on my iPod (the songs being of the non-leaked variety.) I knew that I wanted to post about this album in a bit more detail, and I knew that I had to use a picture of Debbie. I tossed around using one of the iconic Debbie photos that are now between 25 and 30 years old, but instead, I settled on a photo that I think is equally iconic. Yes, she's older in this photo than she was in all those old Blondie photos of yore, but NEWSFLASH, it's not 1980 any more and she's now 62 years old. Personally, I'm thrilled that she is still recording at all 26 years after her initial solo release.

Before I get into the actual record, I will say that I am incredibly biased by the fact that all of Debbie's solo work is measured against Def, Dumb & Blonde, which I consider to be her best solo album. (Yes, I know that Koo Koo is probably more universally loved by fans, but I'm still warming up to that album.) DD&B was another of the quintessential fall albums of my life, another that I bought in the fall of 1992 my first semester at Iowa. Granted, it was in the cut out bin for $3.88, but as I have said before, it was the best $3.88 I ever spent. DD&B is long and rambling and full of different musical styles, but for whatever reason, I can forgive that as the songs are quite good - a few are as good as anything Blondie ever did.

Necessary Evil, however, is too long. This is a common problem with albums 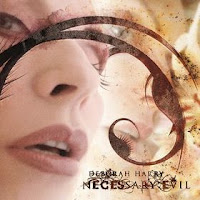 today - this thought that one must by law fill up every moment on a CD is so pervasive it seems. Sometimes, brevity is the better part of valor - or something like that. 17 tracks carries the promise of an all-you-can-eat buffet, but it leaves you with the feeling that you wish you would have quit while you were ahead.

This is not to say that Necessary Evil is a bad record - on the contrary, I think it is more accessible than most of her solo material - especially "Two Times Blue" which I have blogged about endlessly all summer long (here, here and here.) While everyone else was loving "Umbrella", I was digging "Two Times Blue" which was, in my estimation, one of the slickest, most effortless pop songs to come down the pike in a long time. And while I knew radio would never pick up on it (how long has it been since Debbie or Blondie have had a radio hit?), it made me very excited for the album.

However, it is not representative of the rest of the album. Nothing else is as effortless or prompts you to go drive fast with the windows down. But there are still good songs on the record - especially the first 10 songs or so. "Necessary Evil" the song has a great DH rap - the line about selling the "last things on eBay" cracks me up and the 80s arcade game sound effects in the chorus are just perfect. "If I Had You" is one of the best ballads I've heard her do in some time (sadly, it does not top "Brite Side") and while much has been made in other reviews regarding the lyric about the devil's dick being hard to handle on "School for Scandal" that song is actually quite well done and is a solid rocker.

It's in the last third of the album that things start to really fall apart. "Needless to Say" is pretty, but does not stand out. "Jen Jen" is just plain weird and "Naked Eye" is rather boring. The final track, "Paradise" is much better, with a sexy sax, but Debbie seems a bit bored by the whole thing. Ultimately, what I think I would have done is whittled the record down to something a bit tighter - excised "Charm Redux" and "Heat of the Moment" which are Janet-esque interludes and not really songs. I probably would jettison the last few songs on the record and have the last song be "Needless To Say."

While it sounds like I'm underwhelmed by the album, truthfully I'm not. I'm mostly glad that she's put new material out there, when, at her age, it would probably be easier to just ride the nostalgia wave and play the oldies. As I've blogged before, there will come a time when she will no longer record in any form and that will be a sad day indeed.

Until then, whenever I look at the photos from this project, I'll remember Heidi's comment about how she's Anne Murray gone hard because of her haircut. Quite possibly the quote of the year. And I'll sign off with the video from one of Debbie's best known songs - and most sorely ignored from the True Colors Tour -- DD&B's "I Want That Man" Debbie as a vampire, no joke.

I haven't really been able to get
"into" the album much either. And I'm a huge Blondie fan. Notice how I said Blondie and not necessarily DH. But it's all good.

I'd agree with you about TTB. Great song. And I totally think the top DH pic is very iconic. Bravo to Debbie for putting out new material. :)

I have always been of the opinion that DH makes VERY different music solo than she does with Blondie, so I can see what you're saying there.