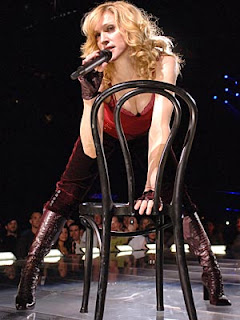 In what amounts to a very bitchy response to the word that Madonna is leaving Warner Brothers, her label for the last 25 years, for a reported 120 million dollar deal with Live Nation, Warner has played all the cards that I have thought they have been secretly holding for the last few years.

When faced with the very real possibility of losing a flagship artist (although one, granted, with much less clout than she used to have), they have chosen to be ageist and cranky, rather than wish her well in her new venture. Even though they will hold the continue to hold the rights to the previous 25 years worth of Madonna's work - which includes the stuff that will likely continue to sell well for many years to come as it contains the material from the days of white-hot fame for Madge, they still had to bring her ever advancing age into the mix (as if they have somehow miraculously stopped aging.)

What do I think? I don't know. As a long time, dyed-in-the-wool Madonna fan, I will continue to follow her and buy her work, whether she releases it on the WB label or whether it's downloadable from her web site ala Casey Stratton. And there are several female artists who have enjoyed considerable success in their autumn years, while not resorting to heading to Vegas.

I am smart enough to know that the name "Madonna" does not equate instant success like it used to. Hell, I don't even always like what she does anymore. But the fact of the matter is that she will always hold my interest because she is very savvy and (usually) knows what she's doing. Who knows, maybe, despite all my (and other fans') predictions to the contrary, her Pharrell/Timbaland project will sell like gangbusters and then Warner will REALLY be eating their words.

I kind of doubt it though. But whatever she chooses to do, I'll be along for the ride.

That age remark just seems unnecessary. I mean, she's almost 20 years older than me and I've NEVER looked as good as she looks now.

And yes, it's been a while since I've purchased a Madonna album, but I know that I'll always be interested to see what she does next.

oh no! Sorry to hear that you are sick ? Have some of my home made cyber chicken soup. It's delish. Tuck that man in bed and snuggle Heidi :P

Oh yeah and Madonna, well of course it's gonna get bitter and bitchy. I too will follow Maddie wherever she goes and will die if she goes to vegas. See you there!

WBR is a creaky old behemoth. There was no way they'd be able to compete with upstart LiveNation )who my industry friend calls "evil" though her paycheck comes from the Big 4).

All bets are off when it comes to Madonna. She is in a class by herself in terms of trailblazing the later years. Look at Cher's tours! Madge will have no trouble selling concert tix, which is where the big money is.