For those of you reading from outside the confines of Iowa, be happy that you are not living here right now.

The phone has rung 5 times in the last hour (probably would have been more if I hadn't spent a half an hour on the phone with my brother) and EVERY SINGLE TIME it has been a political call. It has either been a political survey or an automated call from Hilary or Obama or whoever. It is damn annoying. It is still at least two months till the caucuses and it cannot possibly come soon enough. Perhaps this time around, it's the lack of a clear personal favorite like there was the last time, but this presidential election (which hasn't even really started yet) is really getting old. 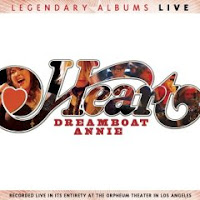 I bought Dreamboat Annie when I was in late high school, when really, all I knew of Heart was their late 80s arena rock band incarnation. I had no idea they did the kind of music that is contained on Dreamboat Annie! While it is rockin' stuff, it is so different in style and tone than the albums they put out from about 1985 on. Consequently, it did not impress me all that much and I put it away, nearly selling it on several different occasions (the horror!)

I finally appreciated Dreamboat Annie for the classic that it is in the mid-90s when I had a huge Heart renaissance thanks to The Road Home. On a record that contains such recognizable songs as "Magic Man," "Crazy On You, " and the title track, I think my favorite track is still "(Love Me Like Music) I'll Be Your Song." It has such a strong melody and the chorus is simply aces, referring especially to the "sometimes I'm not so strong/but even now I could be wrong" part. I love the nuances of Ann's voice - she is truly a great rock singer. (watch it here - it won't let me embed.)

All I can say is thank goodness I don't have a land line right now. *kisses her cell phone* I'm tired of the elections already, too. Living in Iowa is certainly interesting, isn't it? :)

Buy the dvd instead of the cd...you get the same thing plus some. Love Heart!