Boot to the head 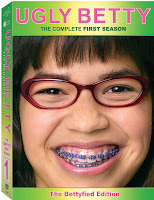 Or rather, a shoe at the TV. Heidi and I just got done watching the first season of Ugly Betty and I seriously had to suppress the urge to throw my shoe at the television. There were so many things wrong with the season finale that I don't even know where to start. But, as Julie Andrews says, "let's start at the very beginning." So that's what we'll do. (TAKE NOTE: Here be spoilers, although I think it's hard to "spoil" something that was on TV a year ago. But if you're thinking of watching Ugly Betty and you haven't, you'd probably be wise to skip the rest of this post.)

Heidi and I have been enjoying Ugly Betty immensely as it is a great fusion of the hour long drama with some great laughs. It is exceptionally well written (for the most part) and also is just campy enough to keep us coming back without us rolling our eyes at its ludicrousness. The show details the comings and goings of Betty Suarez, normal girl from Queens, as she works for the fashion magazine MODE, home to decidedly non-normal people. Betty is the assistant to the editor-in-chief, a himbo that sleeps with anything in a skirt but who also happens to be the son of the CEO of the company that owns the magazine. There's some great secondary characters, especially the Scottish seamstress/designer Christina (she's very Stevie Nicks-ish in many ways), Joan Collins wanna-be Wilhelmina Slater (played fantastically by Vanessa Williams - who knew she had it in her?) and her flamingly gay assistant Marc ("I'll put out a Gay.P.B. with the assistants" is still probably the single best line of the whole season.)

I said that it kind of straddles the fence between being a comedy and a drama, but really, its best moments are when it is being funny. However, there are several poignant moments that can get you *right here* if you're not careful. Most of them involve Betty's nephew Justin who may or may not be of a certain sexual orientation, but his mother loves him dearly no matter what, and even his streetwise, mostly absent father came around to defending him by the end of the season. There is also the whole drama of Betty's father being an illegal immigrant and the budding romance between Betty and Henry, the geeky guy from the accounting department.

Most of the time, the writing is just great. Every now and again, we found ourselves watching it and kind of scratching our heads because it just wasn't the best. We referred to those episodes as "the drunk writer" episodes. Well, they must have really tied one on for the season finale and then done some coke off the big old glass table in the living room because they wrote shit in that came out of nowhere. In the space of an hour, we had:

1) Henry and Betty finally getting together, only to have his ex-girlfriend show up pregnant. He leaves to go back to Tuscon with his ex.
2) Hilda (Betty's sister) and Santos (her son's father) happy at last and planning to get married, only to have him gunned down in a convenience store robbery. Oh, and he missed his son performing in "West Side Story" to boot.
3) Daniel (Betty's boss) and Alexis (his brother who is now a post-op male-to-female transexual) involved in a car accident after the brakes to the car had been cut. They were driving their father's car and Alexis had paid off a hitman to take out their father. Oops! Now they're in the car.
4) Betty's father is stuck in Mexico because he can't get his visa and confronting some ambiguous "revenge" threat.
5) And in the only non-tragic but still out of left field plot development, Amanda is Fey Sommers' daughter. WTF?

That is not to say that it all sucked. There was a GREAT (as in hilariously great) bit where Marc had been traded away to another employer so that Wilhemina could get the wedding date that she wanted. Cut to Wilhemina reminiscing about all the times she had had with Marc as Vanessa Williams sings "The Way We Were" over it. That, my friends, is camp at its finest.

But mostly, it was the biggest WTF there ever was. Why the need to be so fucking melodramatic? I know that it's traditional to have cliffhangers at the end of the season, but at least build toward it! Don't just pull shit out of thin air in the name of being dramatic or tragic and expect me to go along for the ride. It has made me exceptionally wary of Season 2 (which is not out on DVD until September) although you know I'll at least start it because I want to see how this resolves. Even though it pissed me off.

I am not opposed to seeing tragedy, but at least don't have it blindside me. That just makes me angry and want to throw my size 11s at an expensive piece of electronics.

It's like they took a page out of the Joss Whedon handbook (a man who has lost A LOT of credibility with me in recent years.) I didn't even watch Dr. Horrible's Sing-A-Long Blog, but judging from the kind of reaction my wife had to the end of that, I don't ever need to see it.

The fam and I love watching Ugly Betty together, and yes, we agree on the WTF-ery you mention about the first season finale. Extremely over the top "soap opera-ish". Unforth, the 2nd season, I think, drags out the Henry/Betty thing waaay too far. Of course, the writer's strike had a bunch to do with the plot lines and such, but I think overall, the 1st season was the best!

Totally agree with you on Vanessa Williams and her performances! She and Mark sort of steal the show, that is, when Amanda is not!