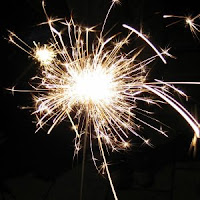 We had a pretty good 4th of July here. We did all the usual things -- the parade in the morning and fireworks at dusk. The best part about fireworks is that we can just walk down the block and watch them from the 6th Street hill. Even though they are shot off a ways away from there, it affords a decent view of the pyrotechnics.

Of course, there were also sparklers and snakes. Anna prefers the new-fangled, 3 stage sparklers. Me, I'm much more partial to the old fashioned sparklers that sparkle for a minute and then go out. I also have very little time for snakes because they are messy and leave what appear to be permanent stains on the cement. We did some at our house in Washington the first year we lived there and when we moved 5 years later, the stains were still there. Mommie would not approve. No doubt she'd make me get out the Old Dutch and SCRUB.

Anna had a good time though. Her grandma (Heidi's mom) has been here the last couple days and today she's going to go back with her and spend a couple days at Camp Grandma. Heidi and I are going down to Jeff's for a Star Wars themed party that promises to be fun.

Anyway, here's a couple of pictures of Anna "sparkling" (but not like Neely) as well as some amazing pictures of the fireworks display that my mother-in-law took. Apparently she has a "fireworks" setting on her digital camera. Who knew? 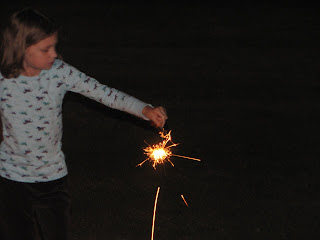 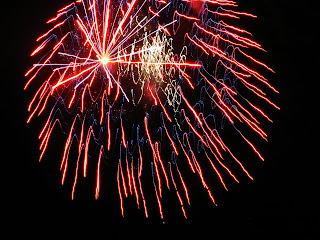 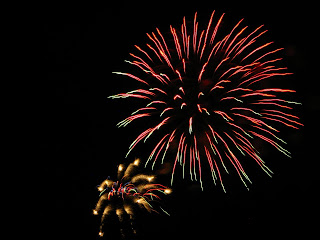