Balloons and beavers and record players

I have a fondness for old vinyl album covers - there's just something about them that a CD cover or (God forbid) an mp3 album artwork file cannot capture. I'm usually not one for "holding the music in my hand" but I will admit to loving the feel of a 12" record album in my hand. Perhaps it's because I had so many of them when I was growing up. I bought vinyl long after it was on it's way out - the last vinyl album I bought new was Bananarama's The Greatest Hits Collection in late 1988 - and even then, I'd gone almost exclusively to cassette tapes. Christmas of 1988 saw the arrival of the CD player so who in the hell needed vinyl?

I've turned a lot of the vinyl albums I have into artwork in my home office (see the post "Vinyl trim") but that's left me with a lot of vinyl albums that I can't play. Usually this is no big whoop as most everything I have on vinyl I have on iTunes. But for some reason, I've really had a hankering recently to get a record player and play some of those vinyl albums. I haven't had a record player in 20 years and although vinyl's making a comeback, I just could never justify the expense of buying a turntable to be able to play records again.

Yesterday we went down to Indianola where our friend Jeff was hosting a party for the National Balloon Classic. He has a front row seat to the Mass Ascension of the balloons. The whole thing sounds vaguely religious to me, but trust me, with the company we were keeping, it was as irreverent as ever. Last year was highlighted by the presence of the Beaver Balloon. 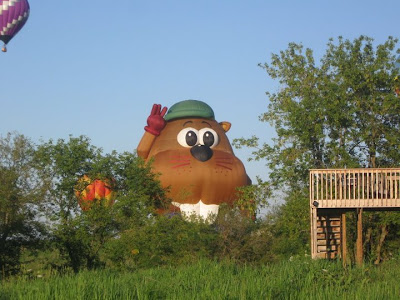 Attack of the killer beaver!!
This year, the Beaver Balloon was back, but it turned it's back on us. You can see it in this photo - it's the lowest balloon about 2/3rds of the way across the picture. 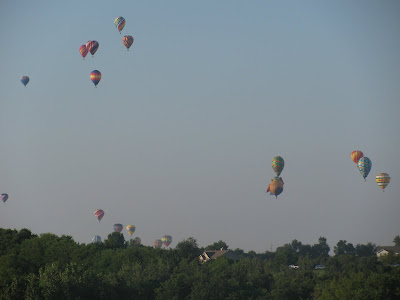 That's right, we were snubbed by the beaver (ironically enough, also the title of my college memoirs.) As we said, if there are any beaver jokes that are not inappropriate, we're not interested in knowing them.

But more than that, Jeff was having a garage sale of sorts - selling stuff he had painted as well as some of his personal belongings. One of those was a complete stereo system WITH TURNTABLE (and speakers) for a lousy 20 bucks. I hemmed and hawed as per my usual and then ultimately purchased it after he assured me that the turntable still worked. I set it up today and have not turned on iTunes all night. Here I sit with 21,000 songs in iTunes and I'm happy as a clam to be sitting listening to record albums, just like I did 30 years ago. No, the sound isn't like it is from a CD or an mp3, but there's just something about it. 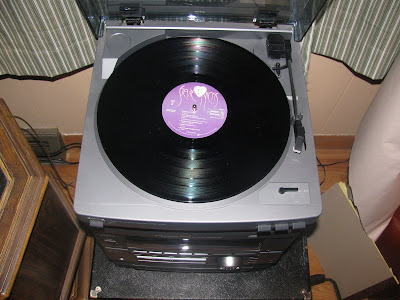 Click to make it bigger! It's Stevie Nicks!
I've also listened to Barbra Streisand's Stoney End and it's just made me more determined then ever to get more Barbra vinyl. If nothing else, I need to get the People album and probably Simply Streisand which are both albums I had on CD in college, in addition to Stoney End. Jeez, having had all those albums in college, it's not surprising no girls wanted to date me! (not really true, but boy I sure couldn't see through the fog of self-doubt and low self-esteem enough to see it.) It's truly amazing my wife said yes when I asked her to marry me. 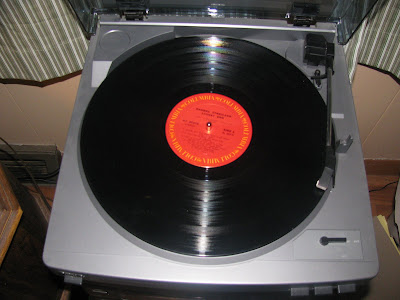 Barbra crimped her hair and went down the stoney end. She never wanted to go down the stoney end!
There's something about vinyl, especially the really old albums, that just seems so right. The acquisition of the turntable for the rock bottom price of twenty bucks makes me want to head to ZZZ Records in Des Moines and see if I can score some Joni Mitchell vinyl, or Laura Nyro's Eli & The Thirteenth Confession. As I've said before, if there's an album that begs to be played on vinyl, it's that one.

I could kick myself for all of the vinyl I sold off in college to pay bills. I'm glad to see it's still alive and well.

You quoted Sandra. That just made my day.