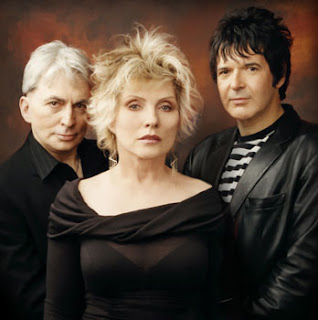 There are only a few artists left on my bucket list of people I really want to see live before I die. I'll have checked at least two off the list by the time the year's out (Kylie and Janet Jackson) and between those two concerts and Lady Gaga earlier this year, I figured I had already spent beyond my concert budget for the year. But when I found out that Blondie was going to be playing at Harrah's Council Bluffs (I always kind of laugh a little bit when I say that), I was seriously tempted.

Technically, I've seen Debbie Harry perform live once and that was at the True Colors concert in Chicago. However, she was a bit disappointing as she played no Blondie hits at all and most of the solo songs she did perform were from her at-that-time unreleased new album. Talk about a prescription for a disastrous set! She didn't even play "I Want That Man" which would have gone over like gangbusters! Plus, she had a very unfortunate hairstyle and, as Heidi so classically put it, looked like "Anne Murray gone hard."

I couldn't help but wonder how different her performance would have been had she been there with the rest of Blondie and because I've been listening to Blondie's music for 22 years now, I really gave it some thought. Then I found out that it was general admission. Strike one. And that it was at an outdoor venue. Strike two. I am too freaking old for general admission shows. I just don't have the energy to fight people for 1 sqaure foot spot of property to stand all night. The National, who we saw at First Avenue in Minneapolis, would have been million times better had it not been general admission. Kylie's first U.S. tour was general admission at the Chicago date, which was one of the biggest reason we didn't go. And my experience with outdoor venues has been decidedly mixed. Most of the time, the weather works out great, but the times it doesn't, it's miserable. But the ticket prices were appropriately adjusted - 30 bucks and some change. Still, I decided against it.

This last week though, I really got it in my head that I wanted to go. At 65, how much longer is Debbie Harry going to want to tour with Blondie? And seriously, Blondie with no Debbie Harry is no Blondie at all. They're not one of those bands that can just replace their lead singer and go on touring a la Journey. During Blondie's heyday, the common catchpharse was "Blondie is the name of the band" so that people took in the whole package vs. just Debbie, but I think there is definitely something to her being the frontwoman of the band.

So I set about trying to find someone to go with. I was pretty sure that Heidi wouldn't want to go, so I asked my friend Matt who pleaded not being a big enough fan. Fair enough, I can get behind that. Then I asked my sister, who has always been a bit of a Blondie fan, but she texted me back this morning saying that she wasn't sure she'd be around that weekend so had to pass. Again, fair enough. My friend Kyl had been the one that alerted me to Blondie's Iowa presence, and I still haven't heard back from him, but I'm starting to think I'll have to go to this concert alone. That is, if I go at all.

I would have no problem going alone if it weren't a general admission show. I do not want to awkwardly hang around the venue for two hours (at least) from when the doors open and the show starts. And also, it's more fun to do stuff like this with a friend. So who knows what will happen. I may ultimately decide against it. I'm still not sold on this general admission shit.

Still, it's Blondie. They're no spring chickens, but Debbie's voice has magically not aged a bit.