The best dancer with the worst reputation 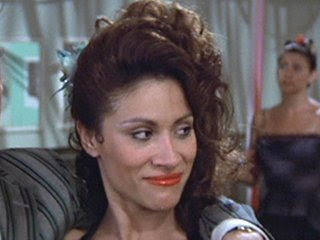 I was saddened to read that Annette Charles passed away yesterday at age 63 of complications from cancer. Annette Charles, for those of you that don't know, is perhaps best known for her portrayal of bad girl Cha Cha DiGregorio in the film adaptation of Grease.

I think you need scientific notation to most succinctly express how many times I watched Grease as a kid. It was on HBO every other day and I swear I watched it every time it was on. Most of that was due to my intense love of Olivia Newton-John during that time, but I also loved the music and the melodrama that the movie version of Grease delivers. I've owned the soundtrack on just about every possible format and I know for a fact that we had multiple copies of the record album growing up. Simply put, it was a very influential movie for me even though now it is kind of dismissed as lightweight and "girly." WTFE.

The thing that always gets me about the movie is how watching it now, you realize that all the leads (and, to be honest, pretty much all the actors playing high schoolers) were too old for these roles. Rather than being high school students at the dance, they look like they should be chaperones for the dance. I never really noticed that during any of my umpteen viewings of Grease until I got older. I remember being a kid and wondering what my high school years would be like and if they would be anything like those in Grease. Let me assure you that they were most decidedly NOT. No one every spontaneously broke into song in my lunchroom.

The most surprising thing I read in hearing about Annette Charles' death is that she became a speech professor at California State University, Northridge. I'm always fascinated when celebrities return to the real world so-to-speak. I wonder how many of her students knew that she was Cha Cha to so many of our generation. I can't imagine that she broadcast that information. She certainly didn't need to be ashamed of it though. We loved to hate her in that role.