Having survived 9 straight days of work, I came home tonight holding my brain in my hand. What I need beyond words is a day off during which nothing is planned. Sadly, that's not tomorrow as I promised to take Anna to Body Worlds at the Des Moines Science Center. It'll be fun and I'm looking forward to being with her tomorrow. We've been anticipating this all summer and since she starts school in a scant 10 days, time is running low.

So to say I was tired and a bit on the cranky side was pretty darn accurate. But it all got better when I saw what the postman delivered for me today. 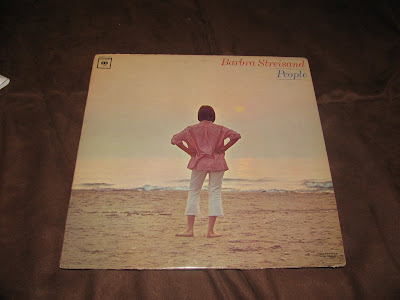 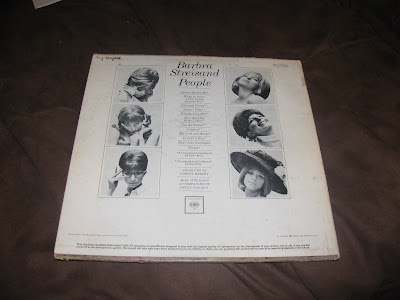 That's right - hot on the heels of saying how I really needed Streisand's People album on vinyl, I went to Amazon and found a used copy for sale. $4.75 including ths shipping. It is probably my favorite of her early albums (although Simply Streisand is a close second) and having getting it on vinyl was just a matter of time. When we were on the last leg of our trip back from Texas in May, I was crabby and wanting to be home and Heidi** put on People and suddenly, I was transformed into a better mood. I think it had something to do with Barbra's diction - that always makes me so happy. There's no "chewing the yous" when it comes to Barbra. And really, the song selection is so good.

I could have spent more for a copy in better condition, but this one works just fine. The vinyl is a little more scratchy and poppy than the ones I've been listening to, but on an album this old, the crystal clear quality of the CD has always seemed a little bit wrong.

I was trying to think of my favorite moments on People, and surprisingly, it's not the song "People." Although I will always remember being in Chicago with Heidi and Jeff, trying to find our hotel and Heidi and I were getting kind of short with each other. Suddenly, from the backseat, Jeff begins to sing "People/people who need people" which then morphed into "People/people who eat people" and then, inexplicably, "Kooka/Kooka kooka maaka/Kooka maaka, kooka maaka/Kooka mo." But really, the Italian spoken part in "When In Rome (I Do As The Romans Do)", the mournful saxophone in "Suppertime" and the wicked vibes at the beginning of "I'm All Smiles" all outshine Barbra's signature song in my book.

But the song that I have the most fondness for is "How Does The Wine Taste?" Again, Barbra's incredible diction is on display as the final "t" in "taste" is accentuated more than it might be by a lesser singer. There are also timpanis and little clicky things. Well, here's a video of it from her TV special My Name Is Barbra. Heidi and I are prone to saying "How does the wine taste?" and then the other will say "Does it sting your lips?" Yes, we are made for each other.

I've been listening to this album while I typed this blog post, and now that "People" is on, I know the album is almost over. I think it's barely 35 minutes - imagine how ripped off we'd feel if an album clocked in at under 40 minutes in this day and age. I guess the trade off was that she released albums practically every year during the 60s.

Now, if only I could get my hands on THIS.

**I should point out that People is one of the only Barbra Streisand albums that Heidi can stomach. She says anything from the late 70s on sounds like someone's grandmother.