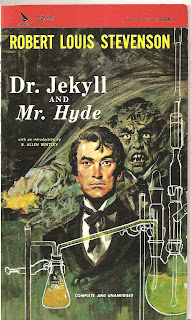 I'm not sure what possessed me to read Robert Louis Stevenson's Dr. Jekyll & Mr. Hyde. I remember reading it when I was in high school (not for a class) but I remembered next to nothing about it save the details that everyone already knows. Even then, I found that I knew less about the novella than I thought I did. The story that everyone knows is that Dr. Jekyll IS Mr. Hyde or rather, Mr. Hyde is the nefarious, evil side of the good doctor which is unleashed by a potion that Dr. Jekyll creates in his lab. Under the guise of Mr. Hyde, Jekyll is able to explore his evil side, only to find himself horrified by it.

I was intrigued by the exploration of the dual nature of man - how even an upstanding man of science with all the right friends can have another side that no one sees. This isn't surprising as this kind of thing is right up my Gemini alley. No one does dual nature quite like Geminis although they usually aren't as tortured by it as Jekyll was by his. What was most interesting to me is how Jekyll was fascinated with Hyde but after a fashion, he almost became a prisoner to him. Is this a cautionary tale about indulging in your less respectable side, that the chances of being completely consumed by it are simply too great? Is it true that once that genie is out of the bottle, it's impossible to contain it? I think it's much more subtle than that, although the broad strokes that Stevenson used in Dr. Jekyll & Mr. Hyde make it easy to relate to and enhance the story.

I think it's not uncommon for people to experience the kind of thing that Jekyll was experiencing, to become obsessed with the side of them that doesn't follow the rules, that spits on polite society. I think it's important to have a relationship with that part of yourself, much like it's important to be in touch with all parts of yourself. I don't think that means you have to indulge in debauchery, but it's important to acknowledge and respect the part of you that doesn't want to be hemmed in by what you should do, no matter how much you might ultimately play by the rules.

The story took me about two and a half minutes to read - it was only about 70 pages long, but it was steeped in a lot of the 19th century turns of phrase that can make reading books of this type a challenge for modern audiences. Still, it was an easy read and worth the time. Also, I couldn't help but think of this song while I was reading it.