And the light that shines through the shining night

Would you just LOOK at what Anna got at Target today? 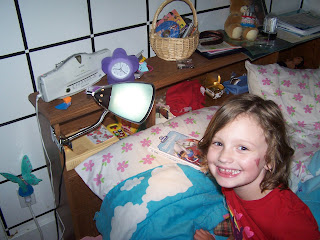 Why, it's a blue lamp! The blueness of it does not come across all that well in the picture, but it is a beautiful shiny blue that she loves and I think is gorgeous. Now I want a blue lamp even more than I did before. I actually had a blue lamp in college - long before I realized the significance of the blue lamp, but alas, it was garage saled or junked long ago.

And speaking of blue things, when I was cleaning out my office the other day, I found something that I had plum forgotten that I even had! It's my 7" limited edition blue vinyl pressing of "True Blue." Behold. 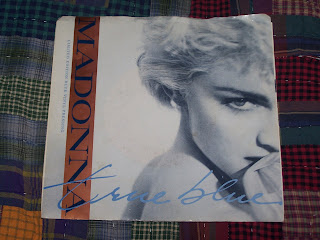 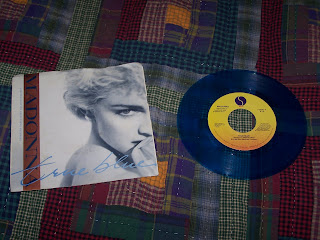 I am thinking of having it mounted and framed as I'm not likely to ever have a record player again, and even if I did, why would I play it? Additionally, a quick eBay search showed that it was really not worth very much, so it's not like I'll sell it. And besides, even if someday it became the most valuable Madonna collectible EVER I would probably still not consider selling it. It's probably the one true collectible item that I actually own.

So we'll see what happens. The garage sale is tomorrow and people had better buy some of the stuff we're selling. I survey the stuff that we're trying to hawk and I think to myself "who is going to buy this stuff?" But as someone at work pointed out to me the other day, you'd be amazed at what some people will buy for a quarter. Or less. Seriously, this stuff is priced to sell.
Posted by Dan at 7/27/2007 11:53:00 PM

have fun with your garage sale

the zaps is back and could do with a blue lamp. Anna has good taste :)

I think it's a good idea to have it framed. I've actually thought of doing that with some of my own cherished 7" singles of which I know I would never sell. I've thought of covering an entire wall with them.

And thanks for coming by to read my 8 random facts post. I've updated to include you so you are official tagged! :)