This is the Zodiac speaking

I just finished reading Robert Graysmith's Zodiac - the book upon which last spring's movie of the same name (starring one of Paul's faves, Jake Gyllenhaal as Robert Graysmith) was based. Anyone who knows me well knows that things like serial killers and generally gross things fascinate me, and this has certainly been no exception. 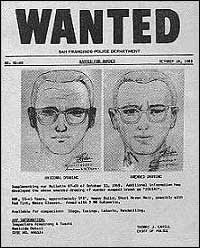 For those who don't know, the Zodiac killer was a psychotic serial killer that terrorized the San Francisco Bay area in the late 60s and early 70s. Officially, he killed seven people. He claimed to have killed 37. And he was never caught. Graysmith was a political cartoonist at the San Francisco Chronicle at the time that the Zodiac was actively killing - and then sending cryptic letters to newspapers with ciphers that claimed to contain his identity.

I remember seeing a show on HBO or something about unsolved crimes when I was a kid and the Zodiac was the last segment in the show. That part never really stuck with me - the part with Lizzie Borden freaked me out beyond words, but that didn't stop me from watching it over and over again until I was so numb it didn't bother me any longer. But I'm a sucker for late 60s/early 70s history as well as being intrigued by serial killers. So this book/movie combination was pretty much a no-lose combination for me.

I had wanted to go see the movie when it was in its initial run, but lack of time prevented me from doing so. Consequently, I didn't see it until it came to the dollar theater and honestly, that was fine with me. It's not a movie that I absolutely had to see on the big screen (as opposed to a certain robot movie that is more than meets the eye coming out this week.) It is a very well directed, well written and well acted psychological thriller. It is full of people talking - not a lot of killing, blood and gore, although three of the murders are reenacted in the film. Because of the fact that it is more of a drama rather than a slasher pic, it probably had a hard time finding an audience. There's no (obvious) special effects and not a lot of car chases or action sequences. I, however, was riveted by the story. I felt that it did a very good job of distilling down what was basically 25 years worth of history into 2 and a half hours.

Even though Jake Gyllenhaal did not age one single bit during 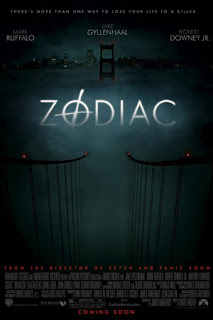 those 25 years, he turned in a great performance as a man obsessed with the Zodiac. I have no real idea how true the film was to Graysmith's actual authoring of the book, but the Graysmith portrayed by Gyllenhaal was intriguing and someone easy to become emotionally invested in because of his clear demonstration of a man pursuing something that he feels is a calling. I don't know - but especially considering where I am in my life right now, I always seem to plug into that kind of thing and occasionally find it where it may not have been the primary aim of the filmmaker/author/storyteller.

Once I saw the movie, I knew that it wouldn't be long before I picked up the book. And thanks to an Amazon.com gift certificate, I did just that. And it was the original artwork copy of the paperback, not the movie tie-in thankyouverymuch. I'm not sure why I didn't want the movie tie-in, perhaps it seemed to be jumping on a bandwagon? In any event, I got the book about a week ago and I finished it yesterday. I really tore through it - it was a very well written book. It was similar to the movie, of course, but there were certain things that the book went into greater detail than the movie did.

Perhaps the part of the book that freaked me out the most was the section that went into all the other murders that the Zodiac might have committed. They were almost all young women whose bodies were dumped in creek beds and ravines. One that hit particularly close to home was the pair of 13 year olds that were killed on their way home from the ice skating rink one Saturday afternoon I have no idea why that affected me more than any of the other senseless murders, but it really did. Perhaps it was because that's closer to my own daughter than any of the others were.

As it turns out, although Graysmith has written what many call the definitive account of the Zodiac murders, there are many that take issue with him - especially with his conclusions as to the identity of the Zodiac. I am currently reading Graysmith's follow-up to Zodiac called Zodiac Unmasked which names Arthur Leigh Allen as the Zodiac killer, even though he maintained his innocence up until his death in 1992 and DNA evidence exonerated him. I am a bit nervous that I may Zodiac myself out and not end up enjoying this book as much as I did the last one, but I'm in the mood to take a chance.

So even if it's revisionist history, it's still fascinating. And worth a look. The DVD comes out (completely sans extras, the rat bastards) on July 24th. And the book, of course, is probably available at your local library.

no extras? Of my lovely Jakeypoos (i'm assuming i'm the paul you mention :P)?? Sigh. However, i will have to read the book i feel after such a glowing write up!

But of course it was you I was referring to, Paul!

And as far as the no extras thing goes - that likely means there is a Zodiac: Special Edition in the works. Double rat bastards for not just doing it right the first time.

I've got to read the book when I finish my classes. I am so sick of reading right now it hurts! But that will pass once the term ends, and then I'll be able to read "for fun" again.

If anyone wants a copy of the HBO Whodunit? Greatest Unsolved Mysteries program you mentioned early on in your article, it is still available from the WIlkman Productions website for $20. Here's the contact info: http://www.wilkman.com/Contact%20Info.htm
I called the number and actually spoke with the Jon Wilkman, the creator, sent my check to the address and a week later got my DVD! Pretty nifty. And such a creepy show.