This is a man's world 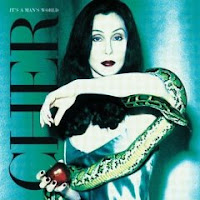 Nestled in between Cher's 80's cheese bombast (not that there's anything wrong with that cheese bombast) and her subsequent rebirth as a dance diva for the end of the millenium is an album that is nearly forgotten. And this is a crying shame, because in my estimation It's A Man's World is one of Cher's best efforts. The album is an interesting bridge between those two phases of her career for it is neither cheesy nor dancey. It is certainly one of my personal favorite Cher albums - even though sometimes even I forget about it.

Cher's approach for this album was pretty simple and straightforward. It's basically a pop rock album with several covers of songs originally recorded by male artists - Don Henley, James Brown, The Walker Brothers, and Marc Cohn among them. And it actually works quite well - a female covering songs originally performed by males. She takes the songs and really makes them her own. It helps that some of these songs are not the best known songs in the world - much like Annie Lennox's Medusa - so the ghost of the original is not as pronounced. However, even on well known songs - especially "Walking In Memphis" - Cher takes the source material and gives it her own unique Cher stamp, giving the piano driven mid-tempo song a hint of a dance beat.

Doesn't Cher just look like a spider in that bus doorway? Like she should come crawling out with eight legs or something!!

What you REALLY need to know about this album - besides that it is an exceptional one - is that there are two versions of it. The version released in the UK contains 3 extra tracks - "The Shape Of Things To Come", "Don't Come Around Tonight" and the hilariously titled "I Wouldn't Treat A Dog (The Way You Treated Me)" - the latter of which turned up on the "One By One" maxi-single. It also contains the ORIGINAL album versions of 5 songs including the first single "One By One." All of these original album versions are so much preferable in my opinion than what was to come with the US release of the album. By the time Reprise got around to releasing It's A Man's World in the US, it was decided that in order to better market the album, some of the tracks needed to be remixed, stripping them of their pop-rock influence and giving them a R&B vibe. You have to bear in mind that this was the mid-90s and R&B was HUGE at that time. However, the decision to do this was ill-advised. For example, the Don Henley track "Not Enough Love In The World" DOES NOT AND SHOULD NOT need an R&B arrangement. You don't get much more pop-rock than former Eagle Henley, and when I finally heard the original version (thanks to the now defunct allofmp3), well, I basically don't ever need to hear the US version again.

Similarly, "One By One" is so much better in its original incarnation. While not offensive in it's remixed form, I love the almost "industrial" sound of the original. The original mix of the chorus is also SO much better than the remixed version. For so many years, I was convinced that it was a completely different vocal take but the more I listen to it, it's just the instrumentation around it that makes it seem different.

This was also one of the first Cher albums that I recall having CD maxi-singles aimed at clubs. "One By One" was remixed by Junior Vasquez and the follow-up single "Paradise Is Here" had several top notch remixes, the best of them being the Eurodance Mix.

While this album did not have the worldwide smashing success of Believe, it is so worth a listen. Matthew Rettenmund recently said on his blog while discussing Deborah Harry and her upcoming album:

I am going to cherish every out-of-the-ballpark performance, wobbly note, triumph and failure because at some point, she is going to stop performing and a chapter of my youth will retire with her.

And that's pretty much how I feel about Cher. She's 61 and at some point, the music will stop, be it because she just is tired of doing it or because she has died. And that will be a sad moment for me. It will probably take a while for me to come to terms with the fact that, when that inevitable day arrives, there will never be a new Cher song or record again. I have a feeling I'm going to cross that bridge with many artists that I admire as they (and I) get on in years. All the more reason for Cher to record a new album, and soon.

But even when that day arrives, we'll be able to look back on an amazing body of work, warts and all. And believe me, there are some big old verucas in there. But It's A Man's World will stand as an underappreciated gem of a record. And one all fans of Cher should search out. Just make sure you get the highly superior UK version.

(props to xo for urging me to post this and providing additional inspiration. And thanks for helping me replace those tracks!)
Posted by Dan at 7/15/2007 11:08:00 AM

I wrote a BOOK here and googled swallowed it! Will try to do it again in the next day. Boo you whores.

Although I'm not really a big Cher fan, I did enjoy Believe and thought it was cool that she had, I think, the biggest hit of her career at that time. I liked the "Paradise" mix you posted as well. Good stuff!

I echo the comment about one day the music being "over" when all the stars we love pass away or stop performing. I will NOT be ok when that day comes for the Queen, her Madgesty herself! I think that must be why I'm not jumping off a bridge thinking of the Madonna/Justin Timberlake or Madonna / Timbaland stuff on the horizon. At least she's still recording. More for us, right?!

it's a man's world album is amazing.. i love the same mistake song..

Great post - it's a very sincere effort from her. Possibly her best alongside Stars (the song Gernonimo's Cadillac is very Walking In Memphis). I'll need to get around to writing about this album myself at some point.