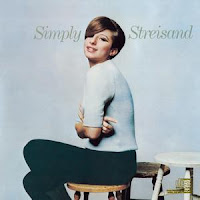 Among the pantheon of quintessential fall albums in the life of Dan, is the 29 minute 1967 Babs album entitled Simply Streisand. It's quite an odd choice for me to associate with the fall - especially since it was released before I was born, even before my parents were married! But alas it is. It is, on first listen, not a very memorable album - she certainly has other 60s albums that are stronger, contain a better song selection, and almost certainly, have a longer running time.

I can still remember the first time I saw this CD. It was late August of 1992. Hurricane Andrew was tearing across Florida and I was in a single dorm room at the University of Iowa. I knew almost no one and was drowning myself in music as I am apt to do at times like those. The lovely thing about Iowa City and the University of Iowa is that the campus is right downtown for the most part, so I was only a short walk away from Musicland (later Sam Goody) and Camelot Music. It was at this particular Camelot that I found Simply Streisand. I was honestly not looking for anything, but, as is the case when you set out to find nothing, things usually jump out and bite you. I remember it being exceptionally cheap - like 9 bucks or something, so it was, of course, an instant purchase. It was even in one of those environmentally unfriendly longboxes, the front of which I still have to this very day!

I got it back to my dorm room and was initially very unimpressed. All the songs were ballads, the instrumentation VERY dated, and I what's more, I didn't really LIKE any of the songs all that much. And then, to top it all off, it was over before it even got started!! Good thing I only spent 9 bucks on it. I figured it was destined to be one of the first Streisand albums that I just wouldn't be able to get into.

Au contraire. After repeated playing (despite my initial hesitation), I slowly began to warm up to it. I grew to love "All The Things You Are" and "The Nearness Of You" - the latter of which is the now, the version by which all other versions of "The Nearness Of You" are measured. I still think that "I'll Know" from Guys & Dolls is the worst track on the record. And ultimately, that short running time played in its favor - I would frequently put it on right before bed and the nights that I would be asleep before "Stout Hearted Men" rounds out the album were always the nights that I had a prayer of making it to my 8:30 Biochemistry class in the morning (back in the day when getting up at 8AM to get to an 8:30 class was no small feat.)

Listening to it now, I think the thing I like most about it is Barbra's diction - something like the vocal equivalent of dotting all the i's and crossing all the t's. This is most apparent in "Stout Hearted Men" (mp3) where she sings:

And then the following:

Give me some men you are stout-hearted men
Who will fighT for the righT they adore.

I love it!! I keep having to resist finishing the "fight for the right" line with "TO PAAAAARRRTY!"

As you might gather, I've been listening to Simply Streisand a lot these days - as I am prone to do in the autumn of the year. I will forever associate it with being in that dorm room in Iowa City, lonely and nervous about where life was taking me. It is, as you might expect, a bittersweet memory, but one that stays alive in the music.

I married a man who discusses "Babs" and "pussy" in the same blog as he also references the Beastie Boys. I am the fucking luckiest girl in the world.

Barbra's "Guilty" album will forever be a fall album for me. I can still feel the college me driving around in my Chevette on lonely cool fall nights every time I listen to it. And Heidi is right, how cool is that!

I like your college memories. Solitary people are so intriguing.