I bought records way after it was cool to buy records. We're talking, it was 1986 and I was still buying records when all my friends were buying tapes, and a few select people were buying CDs. I don't know why I did that - perhaps because my mom had always bought records, but I think deep down, I was in love with the cover art. If there's any one thing I miss about records, it's the detail that you can see in the cover art - something that is diminished on a CD cover and nearly eradicated (and frequently, unforgivably altered) on a cassette cover.

Anyway, I've had all these records sitting around gathering dust in the back room of the basement - being carted from one place to another and so a while back, I finally decided to do something with them. I came upon this brilliant (in my opinion) idea to pin them to the ceiling in my office. I went out and bought some thumbtacks and got to work. This lasted less than a minute as I realized that the albums, even without the records in them, were simply too heavy for that.

Defeated, I decided to pin them up on a bulletin board in my old office. This worked for a while, until my sister came to live with us and needed a bedroom and I relocated my office to the front room of the basement. I came home from work one day and everything in my office was moved and arranged (props to Heidi) and my albums had been put up on the wall. What a great idea!

Well, after a couple years of work (but mostly procrastination) I have finally filled the entire wall behind my desk. Check it out: 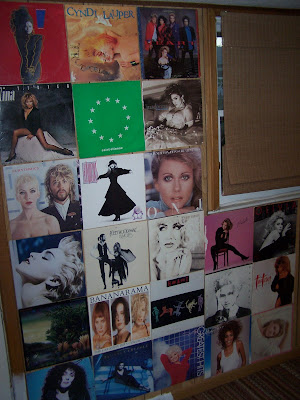 True to form, there are hardly any men up there - only Mick Fleetwood, Dave Stewart and the guys from Heart but who really knew their names anyway? And I will be honest and say that not all of those albums were purchased back in the day, but a good chunk of them were! I picked up Belinda Carlisle Heaven on Earth, Dolly Parton Greatest Hits and Whitney Houston Whitney at Firehouse Books here in Ames while Heidi was in London. And the green album near the center is from a little shop in London - a 12" maxi single of Saint Etienne's "Kiss & Make Up." (is my wife cool or what?) Oh, and Savage was detailed in a blog post a while back as well. But the rest - all from my teenage years.

Totally love the wall o'vinyl! Wish I had me some vinyls to make a wall with! :)