Just look at what I found this weekend at Firehouse Books here in Ames! 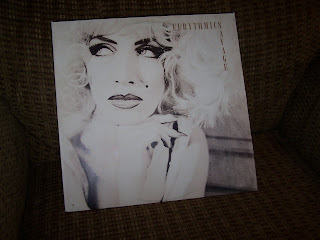 That's right folks, it's a VINYL copy of the 1987 Eurythmics album Savage. Actually, I spotted it on Friday morning when I finally decided to make a trip to Firehouse - I always think about going, but never do for reasons I can't even begin to understand. I always see their ad in the Toons right above the crossword and I think that finding out they had used vinyl was the straw that broke the camel's back and got me to finally make good on my promise to "go in there some day." I didn't buy it that day - citing a lack of funds (seriously, was I really lacking $3.50?) but I told XO and Yuri about it and they both encouraged me to go out and snap it up. Never one to resist peer pressure very well, I went back out on Saturday afternoon, having scavenged the required fundage from the change jar and a dollar bill in my wallet.

Savage is, without a doubt, my favorite Eurythmics album, bar none. I've blogged about it before, but the brilliance that is Savage just cannot be overstated. The craziness of the first single "Beethoven (I Love To Listen To)" should have been an immediate turn-off - talk about completely not commercial! - but oddly enough, it was that song and its schizophrenic video that attracted me to the album in the first place. Now if only I could get my hands on the Savage video - featuring a music video for each song on the album.

Here's some more shots of it (click for full size to see the details of the album art.) The vinyl is actually in pretty good shape. On Saturday afternoon, while folding laundry and cleaning house, I listened to Savage in its entirety on my iPod. If I had a turntable, I would have thrown the vinyl on there. It's not worth much more than what I paid for it in terms of collectibility, but to me, it's a priceless find. 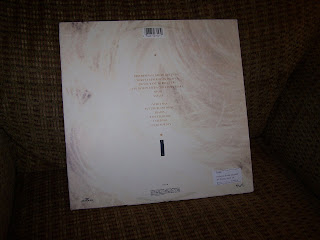 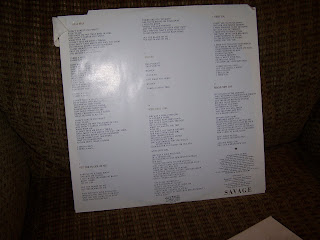 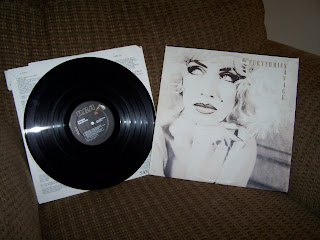 You better keep that sucker locked up or else I may go klepto and snatch it from ya! :) I'm glad XO and I pressured you into snapping it up. Like I was telling you before, Annie had me at "I love to listen to ... Beethoven!" and the frenetic synth beat behind it.

I have to agree, Savage is my fave Eurythmics LP as well.

Wow. I got that thing on cassette when it came out. It definitely blew my mind then.

Now I know what to steal when I break into your abode...Who knows what I'll get up to? You'd love to know, wouldn't you?

OOooo, I thought I was alone in my love for this recording...I've been listening to Put The Blame On Me for the last few weeks over and over again...the whole thing is brill :-)

Did I tell you I was lying--by the way, when I said I would steal your LP? I was just thinking about something sleek to wrap around my tender turntable... :)