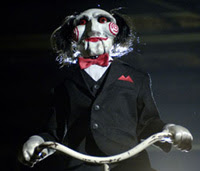 Holy crap, those Saw movies just keep on getting bloodier. I stayed up way too late considering I have to take Anna to preschool by 9AM tomorrow morning watching Saw III (much delayed, I think that the person at work loaned me the DVD probably a month ago!) I didn't much care for the first Saw - mostly because of the little daughter in jeopardy thing. Call me crazy, but that just hits a little too close to home for me now. But then I heard that Saw II was better than the first, so I had to give it a go. And they were right - it was quite good with clever (but gory) traps for the victims and a twist ending I honestly didn't see coming.

And now there's Saw III. The person who loaned it to me at work warned me that they thought it sucked. So perhaps that's why I've put off watching it until now. Honestly though, I really have to be in a mood to watch those gory, bloody, graphic horror movies. I can always be talked into something classic and scary like Night of the Living Dead or Rosemary's Baby - something that scares more with ideas than with gore and blood and splatter. But for movies like the Saw series (and, apparently, Hostel as well) I just have to be in a mood where I can just look away when it gets too gory.

And gory it was. I think I watched about half of the movie - one eye was pretty much continually covered by the blanket. That seriously begs the question "why the hell do you watch such stuff if it bothers you?" I don't think there's an easy answer to that, as much as I'd like there to be one. Personally, I can watch a movie like that and then immediately put it out of my mind - I don't close my eyes in bed and have images of it appear. Heidi, on the other hand, is the complete opposite, which is why she doesn't ever watch those kind of movies. Ever. She watched Shaun of the Dead with me a few weeks back, and even THAT was too gory for her, and I daresay that's about one-third as gory as honest to God zombie flicks like the new Dawn of the Dead.

I think it comes down to I like being scared and that is truly a safe environment in which to do it. If it gets uncomfortable, you turn it off. Or you hide under the blanket.

What gets me about these movies is that I can see why they continually make sequels to them. Saw III blatantly set up for Saw IV which you know I'll watch - and that's exactly why they make them. They can be so bad that it doesn't matter how bad they are. If they scare and deliver a known quantity to a horror audience, they're going to turn a profit. There are no big name stars in the movie. The Saw movies have been shot on a shoestring budget. And then the DVD market makes them even more money than they probably made at the box office. It's a no-lose situation.

Dan...bc here...have you ever seen the movie the sentinal..i got it on netflix and that is classic 70s horror weirdness..and has lots of actors from the 70s... you would enjoy it...i like horror movies and my wife use to when she was really little but then one day she couldnt stand them..overactive imagination i guess...now the previews to the grudge comes on durring americas next top model and she has to change the flippen channel...gotta love that..