The White Tree of Ames

A few weeks back, when it was an unseasonably warm 80 degrees, I took a walk about a mile from my house to take several photos of my favorite tree in all of Ames. I walked not solely because it was such a beautiful day and after several months of snow and cold it was as if the shackles had been undone and we were all set free, but also, it's down by Iowa State Center and parking is at a premium. Actually, there's pretty much no parking that isn't permit only, so I walked.

I love this tree - and I'm not 100% sure what type of tree it is, although I'm fairly certain it's a white oak. It is at its most impressive during the winter months, when it has shed all of its leaves and the white bark is there in all its glory. We refer to it (as the title of this post suggests) as "the white tree of Ames" in a blatant Lord of the Rings reference. Once the leaves come back, the view of the bark is obscured and it looks just like any other large tree that you might see.

Here's a couple of the better shots I got that day. (click for full size shots) 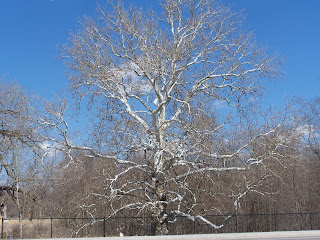 This is a shot from the south side of Lincoln Way, the main drag that runs east-west across the center of town. It's a busy street and getting a shot in which there were no vehicles present proved to be more difficult that I originally anticipated! 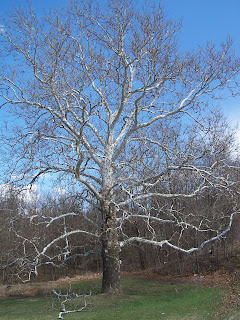 This shot was taken from the west - the branches that are down almost inevitably came down in the ice storm. I really wanted to take the branches home with me, but dragging those heavy limbs for a mile plus was not my idea of a good time!!

And while I was out there, I took a picture of this tree's neighbor, which I thought looked like it had a "monster" in it. Well, see for yourself. 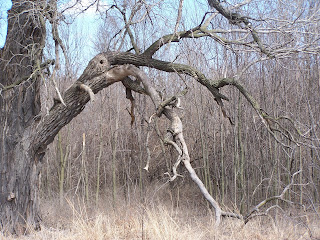 What a funky tree! Does Peter Jackson know you've stolen one of his prop trees?! (I'm not tellin'!!)

I was so thinking that a little man got eaten or trapped in one of the limbs...before I read the caption.. very cool indeed!