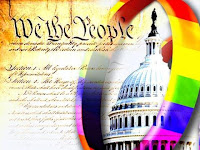 Sure, we Iowans may have voted for George W. Bush in the last election, but who's to say we're really a red state? Our legislative and executive branch are both Democratically controlled, and apparently, we have some judges who interpret the Constitution to apply to everyone - and not just a select few. Observe:

Well, hallelujah. It's about damn time.

Of course, such a thing brings out the trolls and the Bible quoters, but I do honestly believe we will look back in 50 years and realize that this is NO DIFFERENT than the civil rights movement of the 1960s. It just has a different face.

I have never been so happy to have a Democratic governor in this state, because you can bet that had Jim Nussle been elected governor, he would have put the constitutional amendment to ban gay marriage on the fast track. And if we had had a Republican controlled legislature, we might be looking at that as a reality.

Do I think that gay marriage will be legal in Iowa? I'm not sure. Despite the fact that I don't think we are a red state, we are most definitely purple. There is a lot of conservatism in Iowa, mostly due to its rural nature. Western Iowa is VERY conservative. Even the county in which I live would almost undoubtedly vote predominantly Republican if it weren't for Ames. And if you look at the unscientific polls on the news site in the above link, you'll see that people react strongly on one side or the other. And we're pretty evenly split. So yes, there will be opposition. But I think that the ball has started rolling and I look forward to, at the very least, civil unions for my gay and lesbian friends.

It's not about religion folks. It's about equal protection under the law. You cannot grant rights to some of your citizens and not to others. Period.
Posted by Dan at 8/30/2007 06:20:00 PM