Blogging has been light this week - mostly because it's been back to reality. We picked Heidi up from the airport in Minneapolis on Wednesday followed by an interminable drive back to Ames. And then it was back to work for me on Thursday. So that's where I've been.

However, I have been reading Brian Keene's The Rising (as is evidenced by the sidebar) and let me tell you, it takes the zombie genre and turns it on its ear. Short version is that instead of the normal zombie apocalypse involving mindless shuffling hordes of the undead, these zombies are intelligent. They can TALK to each other, they drive cars, they use guns. As a zombie purist, I would think that this kind of take on zombies would be heresy, but oddly enough, it works. And not only does it work, but it is VERY scary. Part of that is the exceptionally good pacing in the book. Keene knows just how to end a scene - such that you're satisfied by it, but want to keep reading so that you can get back to it. 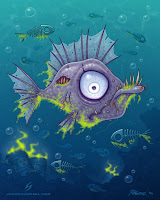 Perhaps my favorite part of the book is the zombie animals - yep, you read that right, even the animals are zombified! The best of all was the zombie tropical fish in the beginning of the book, a scene that painted such a vivid picture in my head that I'm not likely to forget it anytime soon. Just suffice to say that the fish broke the aquarium glass. Yes, you have to suspend your disbelief, but please, the world is populated by the undead in this book. Suspension of disbelief is part of the price of admission.

Word is that they're working on a movie version of The Rising. This makes me alternately excited and nervous, as I'm not sure there's a way to transfer all the scariness that is the novel and put it on the screen. I think it's scarier because it's what I imagine, and seeing it played out in 3 dimensions on the movie screen will be cool in a Lord of the Rings movie way, but I fear the fear will not transfer well. Oh well, time will tell.

In the meantime, since we're talking about fish, here's one of Anna's favorite songs on her iPod playlist. It's Barnes & Barnes' "Fish Heads" (yes, the intro is waaaaay too long, but once the song starts, it's nothing but insanity.)

Glad to hear Heidi made it back safe & sound from across the Pond. Let me tell you, the 8+ hour trip is no fun!