I nearly had heart failure when I heard of the news of the I-35W bridge over the Mississippi River in Minneapolis collapsing yesterday. The reason: Heidi was in Minneapolis yesterday and at first, I wasn't sure where that bridge was in relation to the airport and when the story first broke, I wasn't certain of what time the bridge collapsed. I breathed a sigh of relief when I found out that the bridge collapsed shortly after 6PM, and Heidi's flight left at 7PM, so there was little doubt that she was safely in the airport and through security when the bridge gave out. (pictures via CBS News) 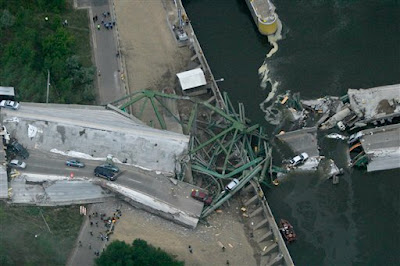 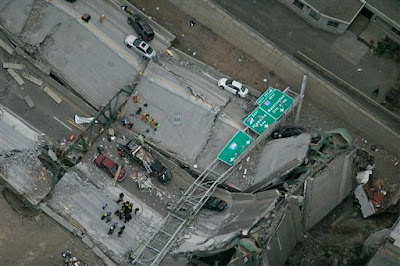 Still, this is a big deal. There are a lot of people that are injured and the number of people that died is still a bit of a mystery. The reason for the collapse itself is an even bigger mystery. But thank goodness that there were lane closures on the bridge - otherwise, it would have been an even bigger tragedy.

And here's some quite shocking footage of the collapse itself.

I thought about this when it happened. Horrible story.

Glad Heidi has made it to the UK.

It's not just a big deal to people in the midwest, it's a big deal to all of us. Just like with Katrina and the levies, this is a wakeup calls for bridges. Unlike 9-11, we can prevent these kinds of disasters.

I'm so glad Heidi and Barb (and my other MN friends) are safe and I'm sad for those who lost loved ones. My prayers go out to them as well.

I feel terrable about this ordeal and the families it hurt.. but lets face it..it should be on the front page of every newspaper in the country with the headlines reading "Your Tax Cuts at Work". Our dad has been ranting about the neglect of education and infrastucture for like 20 years..now crazy stuff like this bridge thing happens and everyone is shocked and when i start to tell them about relationship between infrastucture maintainence and that the health of the economy depends on that..they look at me like monkeys doing math problems..Since the destuction of the 4th amendment of the bill of rights yesterday i guess i should watch what i say less i be taken of for re-education but what we have spent on this war in 5 years is enough to rebuild 1/3 of the american infrastructure...but i know we cant do that because 120 pound arabs in caves somewhere hooked up to a dialysis maching are concocking evil lex luthor like plans..so we cant to that...i know it applys to few on this blog but ...wake up sheeple...before you wake up tomorrow and find out you have to openly ware a red "D" on your person to identify you as a democrat..or maybe a star or david...or a pink triangle..take your pick..