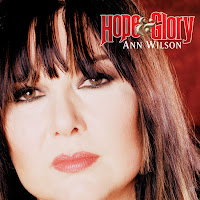 It has taken 31 years, but Ann Wilson is finally releasing a solo album on September 11th, 2007. Up until now, she has hesitated the call of a solo career in addition to her career as the lead singer of Heart, a fact made all the more odd since she has had a couple of "solo" singles culled from soundtracks - "Almost Paradise" from Footloose and "Surrender To Me" from Tequila Sunrise. Many vocalists from equally successful bands (i.e. Stevie Nicks, Phil Collins) successfully juggled both, but for whatever reason, we've not seen much from Ann Wilson solo beyond those two singles and a handful of album tracks.

And Ann can sing...actually, no Ann can belt which I have talked about here before. So I was very excited at the prospect of a solo album. That excitement was dampened a bit when I found out that it was an album of covers. Can an album of covers EVER be fantastic? It's possible, and some cover albums have certainly approached greatness, but an album of covers rather than a strategically placed cover or two amongst other tracks is almost always a bad idea.

Well, I am sad to report that for the most part, the album is very fair to middling. The choice of covers is partially to blame. Most of them are classic rock late 60's/early 70's tracks which are, I suppose, logical choices for her, but they seem very uninspired, deviating very little from the original arrangements. Also, Ann herself seems very subdued - she really doesn't belt all that much! Even on the cover of Led Zeppelin's "Immigrant Song" - a song where she could have belted to kingdom come, she really doesn't. So that's disappointing as well.

But perhaps the biggest disappointment of all is the plethora of supporting artists. While it is natural to expect Nancy Wilson to make a guest appearance, do we really need Wynonna, Deana Carter, Gretchen Wilson, Elton John, and Shawn Colvin (among others)? Again, a few strategically placed guest artists would have been preferable to this. In this respect, Hope & Glory reminds me of Dolly Parton's Slow Dancing With The Moon which was reviewed by one reviewer as Dolly supporting herself with flying buttresses of who was hot in country at the time. Seriously, Dolly doesn't need that, and frankly, neither does Ann. The voice should speak for itself.

All that being said, the album is not BAD. It's just not great. And there are moments that are certainly good. Her cover of Youngbloods' "Get Together" is good but it is mostly just nostalgia for me as we sang that song in high school chorus. And CCR's "Bad Moon Rising" gets a bit of a bluegrass treatment which is also good.

I guess I was just expecting to be blown away by Ann's solo album, and I certainly haven't been. Of course, it's been a while since I've been blown away by a Heart album (although they have had some KILLER songs on those otherwise blah albums.) So perhaps she was just a victim of my inflated expectations.
Posted by Dan at 8/15/2007 08:54:00 AM

The Rufus/Shawn collab is shiteous. I could not even get through it. Massive disappointment. I'll stick with the old classics and lesser-knowns like Allies. In fact I need to hear There's The Girl RIGHT NOW.