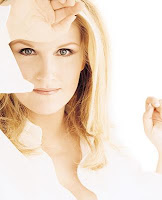 I have rather inexplicably rediscovered Trisha Yearwood in the last week. When you take a look at my musical tastes - tastes dominated by pop music - any country (outside of the great Dolly Parton) seems to stick out like a sore thumb. I have spoken before of my disillusionment with country music - but it doesn't keep me from enjoying a few country acts here and there. And, true to form, they are almost entirely female country artists. Aside from the aforementioned Ms. Parton, there's Mary Chapin Carpenter (thinking man's country, as I refer to her), Pam Tillis (whose entire catalog I purchased within a few weeks back in 1998), Dixie Chicks (even more since the controversy erupted several years back), Wynonna, and of course, Trisha Yearwood.

I would not characterize myself as a Trisha Yearwood fan - the only CDs of hers that I have actually purchased are Hearts In Armor, Songbook: A Collection of Hits and Jasper County. But I do enjoy her music enough. There's just a touch of twang in her voice - certainly nothing like Wynonna singing out of the corner of her mouth or anything like that. And while the style of her music is very much in the vein of the dreaded "contemporary country" she does have some pretty good songwriters behind her. While I tend to have a bit more respect for artists that write their own music, I suppose if you can't, you're better off hiring the best people in the business.

She's not always been successful at what she does, never really reaching the white-hot level of stardom that contemporaries like Shania Twain and Mary Chapin Carpenter did, and certainly has not had the pop crossover that they did, although there is a pop component to it. But at the end of a long day, when I'm mostly tired, but not in the mood for something mind numbingly New Age or whatever, Trisha Yearwood can, in the right moment, have just what the doctor ordered.

The other good thing about Trisha Yearwood is that she is such a good antidote to the Paris Hiltons and Nicole Richies of the world by virtue of the simple fact that she is a Real Live Woman. It is so refreshing to see a female celebrity that is not afraid of curves. I think she's gorgeous. Definitely one for the free pass list.

Perhaps my favorite Trisha Yearwood song is "Thinkin' About You." Talk about a top notch song from a songwriting standpoint. My favorite part is the pseudo bridge:

This single minded fascination I've got
Do you call it love?
Well if you don't, then what?
All I know is I don't know what you've done
And this train of thought ain't about to jump
The track that it's on.

Here, see for yourself:


She's got a new greatest hits out this week, which is a pretty good introduction to her music. It leaves you wanting more, I think, clocking in at a succinct 60 minutes. Check it out if you're so inclined. You might like what you hear. If nothing else, download "Thinkin' About You." You won't be sorry.
Posted by Dan at 9/12/2007 08:40:00 PM

Dan, if you haven't done so already, you MUST delve into Patty Loveless. I worship her. And I'm not much of one for country either.