So today I came across a book the I think Heidi must have brought back in a pile from her mom's this weekend. It was the Little Golden Book of Frosty The Snowman. I had The Night Before Christmas (which, if you believe my parents, I was reading at age 5) and Rudolph The Red Nosed Reindeer, but this was my first exposure to the Little Golden Book version of Frosty the Snowman. I was game, I picked it up and started reading it.

To be honest, it was kind of creepy. It took me a while, but I figured out why. Frosty looks just like serial killer John Wayne Gacy probably would have looked had he dressed up like a snowman rather than a clown. First, Gacy, in his full clown get up: 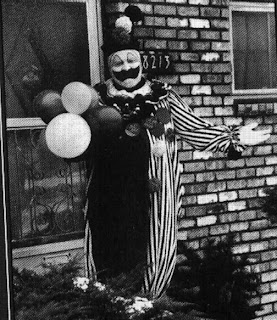 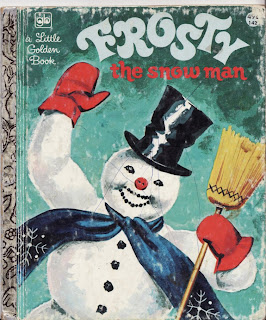 See what I mean? It was disturbing, to say the least. 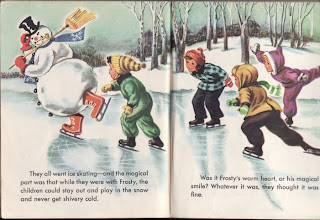 Come on kids! Let's thumpity-thump-thump our way over to my house! There's a crawl space that you just GOTTA see.
All kidding aside, Gacy is such an irredeemable person for all the things that he did. But serial killers have always fascinated me. I think I used to have a paperback about the murders that I think I picked up at a library book sale shortly after his execution in 1994.

And he is also the subject of a Sufjan Stevens song - probably his oddest choice of subject matter for a song, and for him, that's really saying something.
Posted by Dan at 5/28/2008 08:43:00 PM

Dude! You MUST, MUST, MUST read the book 'The Last Victim' by Jason Moss, I believe.

If you're interested in serial killers (like I am) you'll get a kick out of this book. It's a true life account of some kid who wrote to and got interviews with some very scary dudes...include ol' Johnny Gacy.

See this is proof positive that clowns are evil and must all be decapitated immediately. And then cremated. And the cremains buried at a crossroad. And holy water sprinkled over the burial for 12 nights unless there's a full moon in which case a pure man must stand vigil to ensure the clown does not rise again.