Over the last few weeks, my father has been helping me rebuild rebuilding my deck. It was in kind of bad shape when we bought the house, but that's what happens when you buy an old house. During the last 5 years, he has replaced boards that have threatened to give way and ones that have. This summer, though, it was apparent that there were more bad spots in the current deck than there were good ones, so a concerted effort to replace the lion's share of the boards was made.

Well, as of yesterday the work for 2008 is completed. And it looks fan-effing-tastic. Take a look: 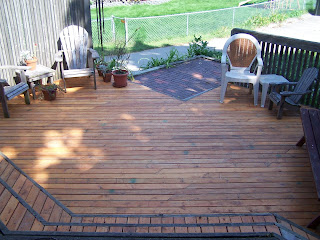 Now we want to have people over just to sit on the deck!

I wish I had a "before" picture to show the dramatic transformation of the deck. However, we didn't do the entire deck. So this picture kind of shows what it used to look like vs. how great it looks now. 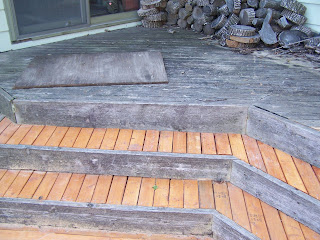 The top portion of the deck and the outward facing boards are on the 2009 schedule. But for now, we are no longer in danger of falling through the deck whenever we step out onto it.

And what became of all that rotted deck wood? Well, Heidi and I became complete sweat bombs this morning and loaded most of it into the back of the pickup. The longer boards that didn't fit are piled up neatly in the yard. I have grand designs of cutting them up into smaller boards and fitting them into the back of the pickup as well, but we'll see. For now, that's where they are, awaiting a better paycheck (the next one) to be taken to the physical plant for burning. Please note that there are multiple opportunities for tetanus now in the back of my pickup. 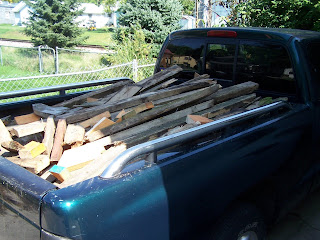 It looks so good, and I can't thank my father enough. He came over on days that I wasn't even home to do the work! Every time I tell him that he doesn't have to come and do upkeep on my house while I'm at work, he says that he's just earning all the Social Security that I'm paying right now! Well, however he wants to look at it. He rocks.

When he came over yesterday to finish the work, he also brought my Darth Vader Collector Case that I had been looking for when we were back home for Mom and Dad's 40th. Mom must have found it and it still has 99% of the figures in there. The only ones missing are Leia Organa and Jawa. Many of them are broken or missing pieces (too much time in the sandbox most likely) but they were well loved. 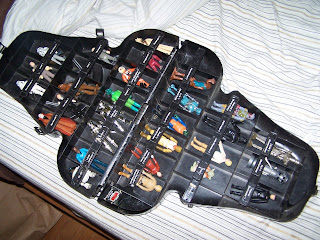 It has been, all in all, a good day off - not to mention a productive one. Not only did we move all that wood but I also cleaned out the grossest utility sink in all of creation and hooked up the converter box for the TV since we have no plans to get cable prior to the great Digital Switchover in February of 2009. We now get three PBS channels.

That looks fantastic! Your father rocks. :)

I had the Vader carrying case, too...but it was nowhere near full.

That deck is great. Should I fly over to sit there? How about once I figure out what constitutes fall flowers. If you see a vagrant digging in those pots, that is I.

I have to admit I love to make lists of things for my Dad to "help" with when he comes over. He has more patience and talent than I.

I'm sure nothing will please my dad more than hearing these words of approval!

XO, the invitation is always there! You just tell me when we have to pick you up from the airport and we'll take care of the rest.