Does that, or does that not sound like a new PBS series? Anyway, it's kind of us right now. I have somehow managed to get the autumn cold that I always get. Heidi was in bed at 8PM tonight after having spent most of the night in a chair under a blanket denying that she was sick. Anna has been kind of under the weather for the last couple of days, but she is by far the healthiest of the three of us.

If I felt just a little bit better, I would be going out to Hy-Vee to get these because I am craving them: 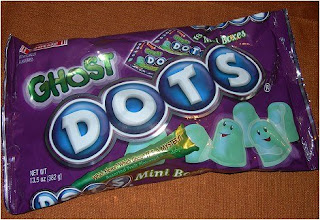 They're Dots! And they're ghosts! Everybody else probably has already seen these, but I have not seen these until this year.