A ghost through the fog

As Sophia Petrillo might say: Picture it. Des Moines, IA. 1988. A 15 year old Dan, recently immersed in Fleetwood Mac is busily buying up all the albums from the Stevie-Lindsey-Christine line up. On this particular day, the purchase was Tusk, the sprawling double album that was the follow-up to Rumours. It is also the last of that set of albums that he had yet to acquire. A stop at Merle Hay Mall left him with exactly what he needed and he held the cassette tape proudly in his hands. Once back at the car, he climbed in the back seat and his folks popped the tape into the car. Christine McVie's "Over & Over" started things off on a nice note. Then "The Ledge" came on and his WTF reaction commenced. 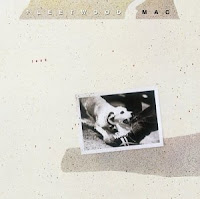 I have been listening to a lot of Tusk these days. As is the case with most of these kinds of things, I can't really put my finger on what brought it on. Tusk is certainly not my favorite Fleetwood Mac album. Because of this, I don't really feel qualified to talk about it -- I don't know that I've ever given it a fair shake. But I have been listening to Fleetwood Mac for 20 years now, so I figured, what the hell? In many ways, I feel like Tusk is a Lindsey Buckingham solo album that the rest of the band was invited to do guest spots on. It's not like Lindsey does the lead vocal on every song and yes, Christine and Stevie get a fair amount of the spotlight, but for some reason, it has always felt like Lindsey's record. Tusk is not a bad album. However, it is chronically misunderstood and also ultimately collapses under its own weight. Very few double albums avoid this fate.
My favorite story surrounding the Tusk album is about how the head honchos at Warner Bros. "saw their Christmas bonuses flying out the window" when they heard Tusk. Certainly, if they were expecting Rumours II, they did not get it. It is big and bold and experimental and self indulgent and only periodically commercial. That has always been my problem with it - it doesn't really sound like Fleetwood Mac. Oh, it does in places, but I think with this record, we saw what Lindsey truly wanted to do in the studio, and he has continued in this vein for most of his solo work.

It is easy to fault Lindsey for Tusk being a big behemoth of an album, but really, he is also key to its success. Lest Matt stop speaking to me, I will say that he does contribute a lot of strong songs, even if the production seems a bit batshit crazy in a lot of places. I have always been fond of "Not That Funny" and I have vivid memories of riding on a charter bus through the night on the way to the Ozarks for a school trip listening to "I Know I'm Not Wrong." Even though I initially reacted very negatively to it, I have come to really appreciate "The Ledge" despite the fact that I couldn't understand a single word of it for the longest time. And although I think the production on his own songs is insane, his production of Stevie is stellar, reminding us that he is without a doubt the producer she needs the most.

It is no secret that I have always had a very Stevie-centric view of Fleetwood Mac, and her five contributions to Tusk are among her best work, in or out of Fleetwood Mac. I will never forget that day in the spring of 88, listening to "Sara" for the very first time. I can't get my head around the fact that there was ever a time in my life that I did not know "Sara." Years later when I was in college, I had a mix tape that collected those five songs from Tusk so that I could listen to them one after another. "Beautiful Child" is arguably her best contribution to Fleetwood Mac, and "Storms" with its key line "never have I been a blue calm sea/I have always been a storm" was one of those songs that I kept coming back to during my adolescence and college years as I grew into who I am today.

Tusk is chock full of memories for me, even though as an album it never got nearly the rotation that Rumours, Mirage or Tango in the Night got. The spring of 1988 was a real watershed time for me, and the music associated with it is indelibly stamped into my brain. I will always be able to summon those feelings and images while listening to Tusk. Perhaps that's why I dug it out after all this time. As I get older, those times become much like Stevie's famous ghost through the fog. The music reminds me of where I've been and helps me figure out where I'm headed.

For all its foibles and indulgences, Tusk sounds better today than the first time I heard it nearly 20 years ago. Time has vindicated it to some extent. It will never be Rumours, but I don't think that was ever the intention.

OOH Tusk! Christine did brilliant songs for it too, with LB's production. I guess the good thing is that it takes so long to absorb. I don't touch most of LB's songs, but... I could and they would seem new!

Stevie's songs here, I think, are probably the best realization of her as a songwriter in the serious non-pop vein. Each one is perfect - and each one stands up to classic artists like Neil Young, Joni M and Dylan.

I was so happy to get the remastered version a few years ago. Thanks for this post!

Me and a friend rushed out to buy TUSK the day it went on sale. I ought the LP and he bought the 8-track. We put the tape in on the drive back from the record store...neither of us knew what to make of it. Finally a SARA came on...I found myself just listenting to the Stevie and Christine songs...like ANGEL and NEVER FORGET...ahhh...swet youth...

Funny...I used to make tapes of only LB's songs from Tusk.

Hey, your chocolate's in my peanut butter!

Tusk, to me, is F-Mac's masterpiece. I love it so.