For me, concerts always have this dreamlike quality about them. When you're in them, you can hardly believe that you are there, and when you leave the concert hall, the experience almost immediately begins to fade, the memory punctuated mostly by fleeting moments that really stick out. And on my budget (and with the kinds of performers I tend to see), going twice is not only financially impossible but also something that seems incredibly excessive.

So it was with great excitement that I got to see the great Dolly Parton for the second time this year on Wednesday night. Thanks to my folks who I kinda sorta talked into going and who then offered to pay for my ticket so how could I say no? Free concerts = the best kind of concerts. 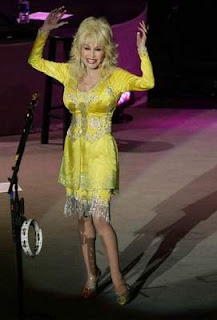 I was ready for the show to be pretty much the same one that Heidi and I saw in May, since it was part of the same tour. As it turned out, I was pleasantly surprised to find a streamlined show from which much of the fat had been cut. Gone were the self-indulgent sections like "Puppy Love" and the enough-already section with the various band members playing non-Dolly songs from the 50s. Dolly also didn't take an intermission either, which made the show just seem that much tighter. One sad cut (for me) from the show was "Baby I'm Burning" which is perhaps my favorite disco-Dolly song. Oh well, I guess you can't win everything.

New numbers in this permutation of the show were a couple a capella numbers - one being "Do I Ever Cross Your Mind" which she did with the male band members after talking about how she would always sing with her brothers as a child. Following this was a fantastic version of "Little Sparrow" which really showcased Dolly's 62 year old pipes (in a good way.)

Dolly was still telling her 30 year old jokes, mostly about how it takes a lot of money to look this cheap and how she wanted to look like the town tramp growing up. But she is so endearing, you forgive her for her repetition.

Sadly, there was still no "Potential New Boyfriend" or "Straight Talk" in the set list, but you take what you get. And when you see Dolly perform live, you know you are in the presence of a living legend and true American original. That cannot be overstated. Even my dad who is no big Dolly fan said that he enjoyed the concert who mentioned that her enthusiasm for performing is very obvious and she put on a very good show.

The life lesson I am taking away from both the Eric Hutchinson and the Dolly Parton show was that these are people who are following their dreams, and really living. Being able to witness people doing that which they truly love doing is an amazing thing. I think too many of us (myself included) have this tendency to just schlep through life, always hoping for the tomorrow that never comes. As Bernard Black would say, we suffer and slave and expire. These two individuals are living proof that he is not correct.

And Dolly, can you please have someone remix "Potential New Boyfriend"? Pretty please?

Dolly put on another great show, it seems. She did sing "Potential New Boyfriend" at our show. I think it would be tighter if she hadn't taken an intermission on our show, but it was still a great experience.

I've been in that spot before...once saw Alison Krauss two nights in a row. First night was just her and Union Station, and the second was part of the "O Brother Where Art Thou" tour. It was great both nights, and didn't even remotely resemble each other.