A chip off the old (Lego) block 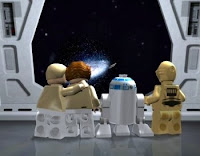 Back in June, for Father's Day (Bedelia), Anna and Heidi got me Lego Star Wars: The Complete Saga for the Wii. I had heard about it and seen it advertised in various places. My friend Matt assured me that it was a good game to play with kids Anna's age, mostly because it is more cooperative than it is competitive. And truthfully, who can resist seeing one of the defining movie series of our generation played out before you in Lego blocks?

So they picked it up - $49.99 in June of 2008. Of course, it is $19.99 at Target right now, but when I think of the hours that Anna and I have spent playing the game, I think that it has been worth more than 30 dollars. She loves it, and what's better, she has really learned a lot about the Star Wars mythology via this game. The game is clever, easy to play for the most part (although there are some places that just stump the hell out of you) and seeing those classic scenes made up of Legos is just a blast.

Anyway, last night, we took Super Mario Galaxy (which I think Anna is going to be getting for Christmas - it was the second time we had rented it) back to Hastings. I wasn't sure I was going to rent anything else but there was Lego Batman: The Videogame, which I had seen the trailer for and had been very interested in. Basically, it is the same premise as Lego Star Wars, only this time, you're playing with the classic Batman characters from the comic books. Anna thought that sounded like fun and so did I.

We were not disappointed. It is harder than Lego Star Wars, but I think a lot of that is the learning curve. We are used to characters that wield light sabers, blasters and use The Force. No such thing here, obviously. We're still getting the hang of the Batarang (and keep forgetting about being able to use it in sticky spots.) Overall, it suffers a little bit because you are not playing through something that is practically a part of our generational DNA, but it is colorful and funny and will definitely be replayable. Right now, we're playing cooperatively as Batman and Robin (for some reason, I ALWAYS have to be Robin,) but you can also play levels as one of many different villains. I can't wait to play the villain levels, but that will probably require us to purchase the game as I don't see us getting that far by next Saturday.

Ultimately, what I love about these games is the time I get to spend solving puzzles with my daughter, even though sometimes we get very frustrated (sometimes with each other.) The cartoony level of violence is appropriate for someone her age - there is no blood, only people made of Legos shattering apart. No, it is not the cure for cancer or world peace, but it is fun and something Anna and I can enjoy together.
Posted by Dan at 11/23/2008 08:25:00 PM