I grew a beard in 2003. It was kind of a spur of the moment decision after years of razzing from my brother about "when are you going to grow a beard." Heidi was going to New York for a week for RWA and I thought, what the hell, I'm just not going to shave while she's gone and see what happens. I experimented with different lengths (usually, the difference was a matter of millimeters) and cuts until I finally settled on the one that I liked. Someone accused me of looking like a Hasidic Jew early on in my experimentation. Nice.

But bearded is how I have looked for the last 5 years. It's not really all that long of a time compared to the other 31 years that came before it. But as you can tell in the posts below, I had to shave my beard for my Halloween costume and let me tell you, it was a moment of stress.

I have no idea why I dislike my shaven face so much. It's not like I have a fat face so I can't say I'm hiding it behind facial hair. Heidi says I look much younger without it, but that's not the droids appearance I'm looking for. I shaved it in New York when I had left my beard trimmer at home and decided rather than go for the Grizzly Adams look, I'd rather shave it off and start over again. The only other time I have been completely clean shaven in the last 5 years was in August of 2007 when I just decided one afternoon that I was shaving it off. After a few days of being clean shaven, I grew it back. It was the first time that Anna ever remembered seeing me clean shaven.

The last time I did this, I didn't blog it. Many people missed out on my clean shaven look. Well, here it is. No beard, but I do have some pretty rad sideburns. 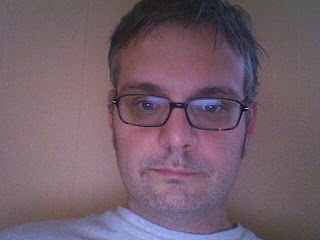 A part of me wants to keep the long sideburns, but it is not the mid 70s.

Fear not, in a week I'll look like my profile picture again. Maybe.

My goatee has been part of my life for the better part of 10 years now. I did fine without it, but now it's like a security blanket. The gray that's creeping into it is making me reconsider it, though.