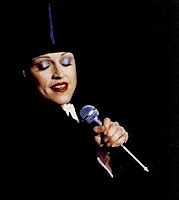 As is pretty usual for this time of the year, I am starting to feel a bit of the pull of the shortening days and lack of sunlight. I have not quite hit the point where I am leaving for work in the dark and arriving home from work in the dark, but that is just around the corner.

So anyway, as I am wont to do when that kind of thing rears its ugly head, I am taking refuge in the music. You never know what I'm going to pick out of the archives at times like these, but somehow or another, this time around it is The Girlie Show. And exactly how that happened, I will never know. It is certainly not my favorite Madonna show, in fact, I frequently forget about it when thinking of Madonna tours. The fact that it stopped in exactly 5 North American cities does not help its cause, but as we all know, America is not the world, and fans in other countries should have an equal opportunity to see her.

I have particularly latched on to "Like A Virgin" from the Girlie Show because it was so out of left field (although not as out of left field as the inclusion of "I'm Going Bananas" - WTF?) This version of "Like A Virgin" is also referred to as "Like A Wurgen" as Madonna sings the entire song in German accented English in the style of Marlene Dietrich. It divides the fans and leaves little room for mixed feelings. You either love it or you hate it. I do love it - although I have always thought that it went on for entirely too long. Her vocals are also not the greatest, but as I frequently say, anyone going to a Madonna show expecting pitch perfect vocals is going for the wrong reasons. The "wo-oh-oh-oh-oh" part is especially painful - talk about 300 pound robin notes as my jr. high/high school music teacher would say. Many fans simply can't stand it and count it as among the worst things she has ever done. Ouch!

For me, it reminds me of why I admire Madonna in the first place - she is (almost) always completely unexpected.

So I will carry this with me today even though it is still dark out and will be nearly dark when I come home.

You are so right; either love it or hate it. Unfortch, I am one of the haters on this. I sorta see where Madgie was coming from (Marlene) but it is so painful to watch or listen to. I'm sure Madge was so sick of the song by then that it must have been devilishly playful (hey it was the erotica tour after all!) to mess with fans like this. But after blowing me away with the Blond Ambition remake of it, I thought this version just, well, sucked. No hate here for those who like it, but it's just not for me.

Wish she could have taken it up an octave and not flatted out so badly on the low notes... other than that it's fun camp. But the off-key, oy.

I always liked the version of Rain in this show. IT was not my fave- and only played Philly, which was not in the cards.