Tomorrow marks the anniversary of two things near and dear to my heart. The first (and foremost) of these things is the 6th anniversary of the birth of my daughter aka Anna turns 6. I have been teasing her all week that I am so excited to be turning 6 (it is in my job description, after all.) Anna replied to this the other day by saying "Dad! You're not 6, you're 44!" Um, not for another 9 years, kid. Don't age me any faster than we both are already. She is going to be having a bowling party this weekend (she got the idea after going to a bowling birthday part earlier this year) and I will no doubt be blogging that. For those wanting a trip down memory lane, I'll refer you to Anna's birthday post from last year. 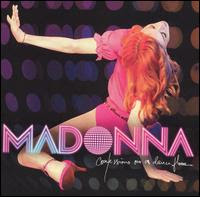 So because I will be blogging the party, I am going to take this opportunity to reflect a bit on the other thing near and dear to me that has a birthday tomorrow. That's right, Confessions on a Dance Floor turns 2 years old tomorrow! I can hardly believe it's been two years. I don't think that the CD has been out of the car for more than a few days in that entire two years. I am amazed at how well it has held up. It sounds as fresh today as it did the day it was released, and in many ways, it is better now than it was then.

I honestly think it is the most cohesive of all of Madonna's albums - certainly of her latter day albums, but perhaps of all of her albums. Madonna's albums are notorious for their filler, but I daresay that there is just not that much filler to be had on COADF. From the beginning tick tocks of the clock behind "Time goes by...so slowly" on "Hung Up" to the acoustic guitar at the end of "Like It Or Not" there is not a single song that I skip past when I am listening to the album from start to finish. In this day and age, where the art of the album really has gone by the wayside, that is a remarkable feat indeed.

The leak of "Hung Up" was probably one of the most exciting recent Madonna moments. As someone wrote back around that time, it achieved the impossible by making ABBA's "Gimme Gimme Gimme" even gayer than it already was (and that was meant completely and utterly as a compliment.) That sample has, for me, really become more strongly associated with Madonna than with ABBA. You know that you've succeeded in using a sample when that happens. When I get my new cell phone, I am going to figure out how to download the "Hung Up" ring tone that uses the "Ring ring ring goes the telephone" line. Totally cheesy, but yet, very appropriate for me.

"Hung Up" was not the massive hit that I thought it would be, but, let's face it, Madonna really is past her prime when it comes to charting. She will never be the charting machine that she was in the 80s. And really, that's okay. It went top 10, which is more than anything from American Life did, but really, it should have done so much better.

I did not listen to any of the other songs prior to the album release (oh, except for "Sorry" because I just couldn't resist!) - probably not something I could do now with the blogging community I have where the leaks seem to come faster than I can keep up. I remember reading some reviews prior to the album's release, and most of them were positive. One of the few negative reviews I remember said that the album was so wooden and thump-thump-thump repetitive it should have been called Confessions OF a Dance Floor. Clever, and admittedly I was worried. I shouldn't have been.

she's ever done. Even "I Love New York" which I originally did not like much because I found it to be very beneath Madonna, grew on me, perhaps because it was one of Anna's favorite songs on the record. I don't know that I will ever forgive the "I don't like cities but I like New York/Other places make me feel like a dork" line, but it is Madonna who has never been known for her stellar songwriting abilities. The standouts tracks for me are definitely "Sorry" - a classic kiss off in a minor key to boot, and "Future Lovers" which is, simply put, the best opening to any Madonna tour ever. I just can't imagine Madonna topping her entrance from INSIDE a disco ball. And, of course, there is "Jump" from which the tagline of this blog was culled and the underlying message of which has become a recurring theme on many posts that I have done over the past couple of years. Not every song jumped right out at me. "Let It Will Be" took a bit of getting used to, as did "Push." But now, they all blend seamlessly together for me, a great album from beginning to end.

A lot of the credit for the success of COADF must go to Stuart Price, who really was a muse for Madonna on this record. If nothing else, he really knew how to push the buttons and twist the knobs in the studio to get a high quality product. A certain percentage of fans fault Price for lifeless production and miss Madonna's ballads, to that I say pish-posh (well, not really those exact words, but you know what I mean) because the record is fucking fantastic. There's plenty of time for ballads, let's get out on the dance floor. And Madonna provided a perfect record for booty shaking.

So happy birthday, COADF. Your are one of my favorite pop albums of all time. Not since early in her career has Madonna been so effortless in crafting pop songs while also making you think every so often along the way.

OMG! Has it really been 2 years since COAD was released?! I could have sworn it was a year max! I couldn't agree more that this is perhaps the best Madonna album of all time, certainly of late. I keep the songs in constant rotation, and they never seem to get old. I love all the songs and would have killed to be there to see her disco-ball entrance!

The next tour...I'm all over it! Bring it, Live Nation!

I am going to read each of these links on the weekend.