No day but today

The blog is neglected, but it's been a busy week.

Tonight, while Anna was playing Zoo Tycoon on my computer, we had the iPod on random and some of the most bizarre things came up. But "Finale B" from the movie version of Rent came on and I had forgotten how much I like that song. And really, the entire musical of Rent. 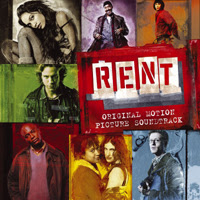 Let me just say that I am not a Renthead by any stretch of the imagination. My only exposure to it has been via the movie version, which got decidedly mixed reviews. I remember when I got the movie from Netflix and was watching it, Heidi walked through the room and commented that based on what was playing on the screen at the moment, she never needed to see it and probably needed to stay as far away from it as possible. This is likely true for Heidi who had to endure Evita with me twice in the movie theater (although she really liked it, I think.)

But I do like Rent. I think the reason I like it so much is because it was such a part of the 90s zeitgeist. Truly, it is 90s nostalgia, even though the show ran on Broadway well into the 2000s. And it will probably never stop playing in a traveling version. The other reason I like it is because of its New York connection. But really, the story is good and the songs are excellently sung by a great cast. I can live without the Bon Jovi styling of Adam Pascal, but Anthony Rapp is perfect in the role of Mark Cohen. I am glad that the producers of the film version resisted the urge to cast "movie stars" and instead, let the members of the original Broadway cast reprise their roles. Not everyone made it back, but it's a good cast.

I am also a sucker for the big ensemble cast in a story that explores how all their lives are intertwined, which this show has in spades.

But "Finale B"? The lyrics certainly contain a lot of cliches about seizing the day and living in the now, etc. However, just because they are cliches doesn't make them any less true. Forget regret or life is yours to miss. No other road, no other way, no day but today. Yes, I'm a sap. So sue me. I also love how the men and women have this great interplay of vocals. All around just a great way to end the show.

Watch it. It's good stuff. And I can't get over how Anthony Rapp in this clip reminds me of my brother-in-law.