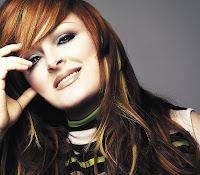 I don't know why, but today, I was thinking of Wynonna Judd. That is not an every day occurrence for me. Specifically, I was thinking of a song from her Tell Me Why album called "Girls With Guitars." I simply could not get the "he drove her in the car down to Sears Roebuck" part out of my head. Seriously, that's the kind of random shit that goes through my head on a regular basis. Aren't you glad you aren't in there 24/7 like I am? As far as being an earworm goes, it certainly doesn't hurt that the song is so cleverly written, but since it was written by Mary Chapin Carpenter, I would expect no less. Heidi and I are fond of saying that Wynonna is always singing out of the corner of her mouth, and I swear to God it's true (or at least it sure sounds like it.)

Anyway, I was playing "Girls With Guitars" tonight and Anna, who was hanging out with me down in my office, really latched on to it. She pulled out the old acoustic guitar that I've carted around since my grandmother died in 1990 and started hamming it up, especially once she figured out it was "Girls With Guitars." 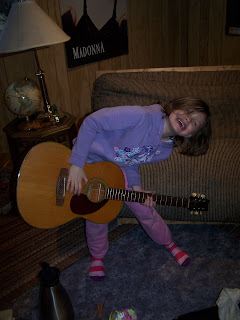 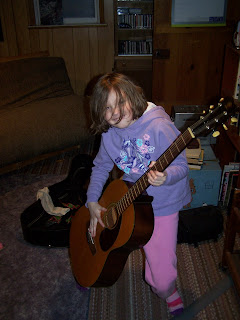 And then, of course, there was video, complete with Wynonna growling and singing out of the corner of her mouth.

She'll surely hate me for that later, but I'm willing to take that chance. After a long day at work that, while not particularly bad was still stressful, this was exactly what I needed.

I had intended to do a mega-serious post that was inspired by a book I have been reading, but I fear that may never gel well enough to post. This will have to suffice.
Posted by Dan at 3/29/2008 08:05:00 PM

It's 2026 and Anna Cullinan presents:

(((Don't make her cover You Oughta Know whatever you do! She's too innocent!)))

That's quality, through and through.

We have regular jam sessions in the Nerdery as well at the House o' Troupe. I should get it on video one of these eons.

That Anna's got some rockin' moves!

i remain in jealous awe of your ace family :) Again i cry please adopt me :P