I am up entirely too late tonight, but Heidi, Jeff and I had a Queer As Folk marathon. Only 10 more episodes to go. That will probably take us 2 years to finish at the rate we watch. Watching that show is not easy with a 6 year old around!

So over the weekend, I saw Cloverfield, which I had initially avoided for competely unknown reasons. I think I got caught up in a bit of a backlash against it, railing against it as a Blair Witch clone and irritated that there was the possibility that the monster would never be revealed. Friends of mine went and told me that I needed to go see it, and still, I resisted. Once I found out that the monster does actually appear onscreen, I started to rethink my opinion. By the time I saw the trailer again prior to The Mist, I was bound and determined to be part of the experience. You can't be as into the pop culture as I am and miss things like that. When it showed up at the dollar theater this weekend AND Anna was away at her grandma's house, I went. It was very good, even though the pretty people with perfect teeth really annoyed me for the first 20 minutes or so.

The monster was VERY cool, not at all like other monsters that have destroyed the Big Apple. It actually reminds me a bit of the Grither from a Tales from the Darkside episode that I remember being scared to death of as a kid. When I found this, I thought I had died and gone to heaven. 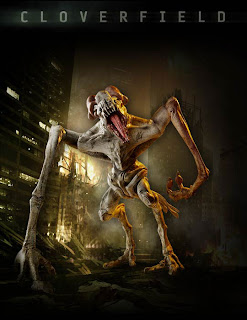 That would fit in quite well with all my figures in my Nerdery!! The only trouble? It's A HUNDRED BUCKS!! I think that a hundred dollars is too much for a toy, no matter how many points of articulation it has, even if it DOES come with a Statue of Liberty head and 10 parasites. Intellectually, I believe this. Emotionally and when my 12 year old boy is firmly at the controls, I know that line of reasoning is complete and utter shit.

Well, when you get time to have another marathon, let us know, we can provide the DVDs (and the place, if you can get a babysitter, so you don't have to keep pausing/fast-forwarding)!