If we are to believe People magazine (which we all know is Blanche Deveraux's one "serious" magazine purchase at the grocery store), this is the cover of Madonna's upcoming album. 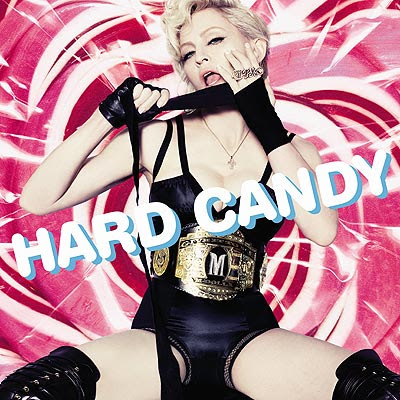 Seriously folks, I don't have Photoshop and have no Photoshopping skills to speak of, AND I THINK I COULD DO BETTER THAN THIS! If this is, indeed, the cover of the new album, it will be the worst since American Life. She is looking a bit like a cross between Hillary Clinton, Deborah Harry and Geraldine Ferraro!

The single cover, however is much more pleasing to the eye (if you ignore Justin Timberlake) - and I found out via Facebook that it will be available for digital download on March 26th! 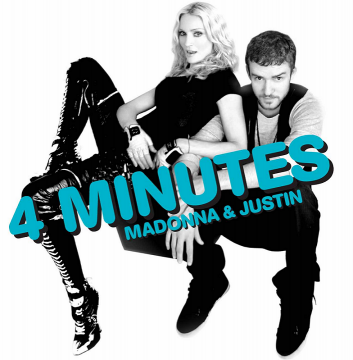 EDIT: I have been thinking about this album cover and I think my biggest problem with it is how cheap it looks. The font is bad, for one thing, and it looks kind of like something you might paste together for a high school yearbook. Plus I don't think the photo is exceptionally good and it is certainly not iconic in the way that so many Madonna photos have been. I mean, even the ones from the "Human Nature"/Details magazine shoot were a bit iconic, even though she didn't look great in them. 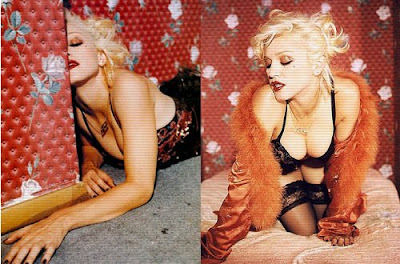 I remember just being so excited when the Confessions artwork leaked. The red hair, the high heels, the disco ball motif. It was all so...perfect. Even if the "f" in "confessions" looks famously like a tampon string. 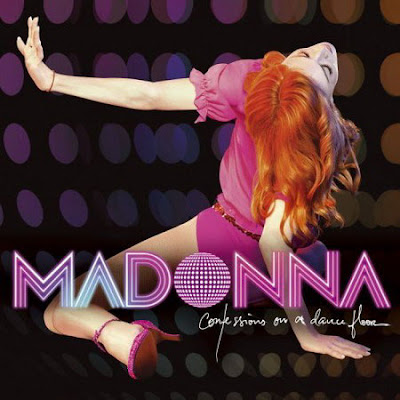 I cannot speak for Madonna's people, but it seems like more thought went into the FONT on COADF than into the entire album cover for Hard Candy. I was just telling Heidi how much I was lamenting it, although I know that I will buy it. I will never be one of those people that loves everything my favorite artists do. If they put out shit, I will not be afraid to call it that. But everything about this project is screaming "mid-life crisis! must be relevant! must appeal to the kids!" and I just don't know.

Hmmmm - I am hating it too. She looks like Fergie, and that's not a good thing in my opinion. I hate the Four Minutes cover even more - they just look so naff and cheap. Yuck - like advertising for a new soda drink. Hideous. I am lamenting. I bought the Dazed and Confused Magazine the other day. It cost £4 (or $8)which is expensive for a magazine and there are two pictures - yes, two - from that Steven Klein photoshoot, and the shortest interview ever. Also the Interview magazine had one cover photo and that was it.

What's happening - what happened to the days when Madonna gave long in-depth interviews with gorgeous photo spreads made up of many pictures? Has she just lost interest? Seems to me she did one photoshoot with Stephen Klein for the album, and the off-cuts (and here mustn't be many of them) have been given to magazines to accompany their short telephone interviews. Everything about this record/era says 'Madonna has lost interest'. Everything seems so rushed and ill-thought out. I long for the Ray of Light years. :0( Having said all that, I'm planning a Madonna special on my website in the next week or so. She's still the Queen after all. P

Ack. I hate that album cover! But if you're looking for a clue to the font - it seems to be the same on used on Good & Plenty candy.

Agreed totally about the album cover screaming midlife crisis. And the spread legs. She is in for some heavy criticism. The whole thing reeks of "I left Guy Ritchie!"

I'm totally unqualified to weigh in on this...I only know as much about Madonna's career as any pop-culture aware 30something...but I have to admit I kind of like the cover.

I find it sort of vibrant and punchy. I think the font is deliberately candy-like. I like the juxtaposition of the "sweet" font and candy background with the decidedly not sweet Madonna in that photo.

I'm surprised at the Madge fans who are offended or turned off by this cover. This is who this broad is. Or has everyone forgotten the Sex book...or Erotica.... or "Justify My Love"?

She's sticking to her guns, if you ask me. She's like the Mae West of pop at this point!

Good one, D'luvz. Mae West, I think, is who Madge is attempting to channel in the standing photo also out with the cover. Dan told me he read that someone compared that pic to Dolly in Whorehouse...lol!

I hate to seem ageist but I just feel like the Sex/Erotica/Body of Evidence phase was fine for someone 35, but she has been there and done that and at the age of 50, she should know better. That doesn't mean she should stop being sexy, she just needs to find a way to do it without seeming like a 50 year old trying to act like a 28 year old.

Couldn't agree more with you Dan on this one (and I don't think you are being ageist, just a realist). It is the fact that celebrities in their forties or above are not capable of finding ways of being sexy whilst retaining something of their age, instead of aspiring to a template of sexiness that is based on being twentysomething. I find Madonna at her sexist when she's wearing a beautiful dress, like the one for her recent Malawi-Gucci benefit, which made her look regal, elegant, sexy and sophisticated.Not dressed up like Fergie pretending she is Queen of the Pussycat Dolls. Who am I to judge though - I just think there are more important things in life than appearing sexy. My main objection however to the cover of her new album is how poor it is from a design perspective. Looks cheap and thrown together. Madonna's album images are iconic. This one just plain isn't. P

I was unsure at first, but now I love it. I guess if I was a lady and looked that good at 50, I'd want to show the world my cooch too.

Put it this way; this surprised me. I didn't expect the album cover to look like this, nor did I think she'd ever take on the image of a wrestler for an album cover.

Her hair IS a bit Kylie '2 Hearts' though.

I completely understand the dislike towards it though; I guess I just miss Madonna being a trashy whore and this sort of brings that girl back into my life.