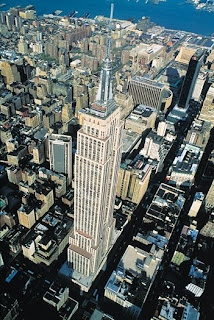 Life sure is interesting when you let it get that way. Yesterday, Heidi's mom called her up and announced that her work is sending her to New York City for 5 or so days the first part of April. She didn't want to go alone, and she said that she would pay the ticket of one of us to accompany her to The Big Apple. Heidi would go in a heartbeat, I think, but now I've been charged with the task of giving serious thought as to whether I want to go along as well. We would also probably be taking Anna with us, as that long away from her is something that I don't think Heidi and I are quite ready to do yet, not to mention Anna. She would be fine, but still.

I'm torn. I really want to go. I have wanted to go to New York for as long as I can remember. I have always had a romanticized view of NYC. In college, I always loved reading books that took place in New York, taking in the sights and sounds of the city vicariously through the characters in the books. My favorites were the ones that referenced actual New York streets and landmarks. Then I would go to a map of Manhattan and figure out exactly where the action was taking place. I even had a poster of a satellite image of Manhattan island hanging in my college apartment bedroom, such was my love affair with this place that I had never been.

The irresponsible, live and live now portion of me really wants to go. The part of me that is the cooler and more responsible head is saying that I really shouldn't. I have so many things I want to do this year and next, and I am having a hard time figuring out which of those things I would want to sacrifice in order to do this. Heidi says to me that it would be replacing a trip to Arizona that we probably would have taken in early June, a trip that we won't be taking now because my brother and his wife will be in Russia. The fact that one plane ticket and the hotel would be paid for is a big argument for doing it. Still, New York can get so expensive so fast, even without trying. If I were to go, there are so many things I would want to do. None of them are free, I'm sure.

Mostly I'm just musing out loud for if we are to do this, it needs to be decided rather quickly. The first week of April is a mere month away. Plane tickets are 300 dollars +/- 20 bucks. Of course, all this is dependent on whether or not I can actually get the time off work, which is a big unknown as I don't recall what the vacation situation is at that time, even though I was just working on the schedule on Thursday!

Check with me, I know a lot about NYC and might be able to help you figure out whether it is worth it.

Olga & I went (with my boss!) as an excursion while on a legit business trip. While we were only there for an afternoon, we had the time of our lives. Times Square, the Empire State Building, and really Manhattan in general. If you can swing it, I def recommend it!

Oh go! It's an opportunity with little negative consequence and therefore should be grabbed at with both hands, not angsted over. If long-term concerns are the concern then consider this: when you die, better to regret the things you've done than those you haven't. Plus the hotel room is the single biggest expense in NYC, so if that's covered you're golden. Plus Plus New York is fabulous in Spring!