It's 12:33 AM and we're under yet ANOTHER severe thunderstorm watch. The street outside is a river (only a slight exaggeration) but the basement is dry (for the moment.) Iowa City, which was my home for the largest chunk of my life outside my hometown is threatened with record flooding thanks to all this excessive rain. I'm not going to bed until this passes. Good thing I don't work till 10 tomorrow.

Anyway, the birthday was good. Thanks to all those wishing me well as I embark on this portion of my 30s. I truly didn't know so many people gave a shit! My folks came over today and with them, they brought my present which was Guitar Hero III: Legends of Rock for the Wii. Really, it's all Matt's fault that I am even interested in Guitar Hero at all! Perhaps my biggest surprise was to find "Ruby" by the Kaiser Chiefs on there as a song you can "buy" with the money you make in career mode. I love that song, and I think I have Paul to thank for that one!

Anyway, here I am, rocking out. 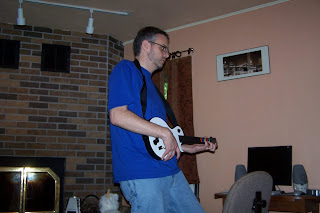 We had a nice dinner and the weather, amazingly enough was fantastic. That was followed by the traditional singing and cake and what not, which was all good. Here's a couple shots from that - one of Heidi and me, and the other of Anna and me. 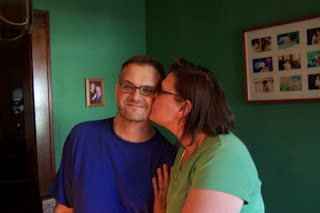 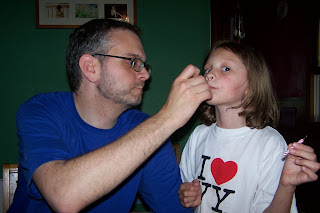 In addition to all this fun, I also helped fix a toilet! I learned so much that should I ever have to do that again (chances are high, there are two other toilets in the house), I could likely do it all by myself.

Anna was especially precious today because she bought me a second wheel for the Wii so that we can play Mario Kart in tandem. She even spent her very own money on it, made the card herself and also designed the wrapping paper. I think that Jeff would be proud of her!

So now, the storm has passed and I'm off to bed. Heidi bought me a new alarm clock which is on the bedside table next to me. It looks like a Dalek, I must say. It's one of those progressive alarm clocks that wakes you up either with light or sound or smell or some combination of the three. I am forever complaining that my alarm clock is the most annoying one on the planet, so hopefully this will remedy that situation. I hate that fucking old alarm clock.

I hope you realize more and more that you are wiser than you imagine. We all say, "Err I feel like a teen still" but when push comes to shove, the wisdom of the years does appear.