Gimme what'cha got, ready or not 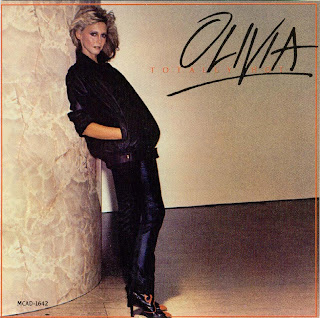 Before Madonna, there was Olivia. ONJ was my very first celebrity crush, the first in a long line of crushes. I don't know what it was that initally drew me to her. It was probably the ubiquitousness of Grease during my formative years. I was powerless to resist the story of Sandy transforming from goody-two-shoes to sexpot in tight pants (that zipped up the back no less!) "Physical" was the first 45rpm single that I ever purchased, and as I've detailed in a previous post, Olivia's Greatest Hits, Vol. 2 was the first album I ever bought with my own money.

The greatest hits albums are the safest bet with Olivia. Her studio albums are all a bit hit and miss, usually a couple of hits surrounded by massive amounts of album filler. This is especially true of her early albums, back when she was a "country" artist. I have quite a few of these albums but they rarely get listened to because I just cannot abide by those breathy vocals. But there is one album that stands out amongst the rest. For my money, her best studio album is and will always be Totally Hot.

Let's just get the obvious out of the way. She is, well, totally hot on the album cover. I remember being a kid and getting this album for my birthday (probably my 11th or 12th) and just sitting on my bed and staring at that picture of ONJ. It didn't hurt that the hormones were probably just starting to kick in then, but she is just fantastically gorgeous on that album cover. In fact, the entire photo shoot is very subway chic with a dose of roller disco thrown in for good measure (minus the actual roller skates.) I remember wondering whether or not those were the same pants she wore in Grease, as if the wardrobe budget was suddenly short and they had to recycle.

But enough about Olivia's tight pants, let's get to the music. This is such a strong set from Livvy, there really isn't a dud in the bunch. This is truly amazing, given what I said about her studio albums and the sheer volume of filler she is capable of. Musically, this is the first time that she took a chance and tried something different, which was a good thing as her white-bread country girl image had about run it's course by this time. The album opens with one of my all time favorite ONJ album tracks - "Please Don't Keep Me Waiting." Swirling synths and a solid vocal performance by Olivia nearly cancel out the hilarity of the final two minutes, in which Olivia screeches like a bat. Hell hath no fury like a woman scorned. Notice that I said nearly cancel it out. I still can't listen to this song without cracking up - and that's a compliment, believe it or not.

Another strong track is the overplayed but still fantastic "A Little More Love." A plea to a lover for just a little more committment, I remember as a kid never really knowing whether or not she was singing "Will a little more love make you start depending?" or "Will a little more love make you stop depending?" Well, I guess since ONJ is trying to keep her lover, it's "start." I also really love the song "Talk To Me" which has a funky electric guitar riff in the beginning before settling down into a late 70's pop groove. It contains probably the only reference to "psychiatry" in any song I can think of in the chorus: "You don't need no psychiatry/Come on, baby, you can talk to me/Cuddle up on the couch with me/We can talk all night for free." The best part is how "psychiatry" comes out as "skyiatry."

But the best song on the entire album is the title track. I have probably listened to in hundreds of times in my life and it seriously never gets old. Another funky guitar, another great chorus, and more growled vocals by Livvy. It seriously doesn't get better than this, folks.

A lot of people count the Physical album as the point at which Olivia really left her country audience behind and embraced the pop crossover. While that may be true in some respects (there's still a healthy dose of adult-contemporary/pseudo-country on Totally Hot), this album is really when Livvy broke out of the white-bread image and got down and dirty. Well, as dirty as she could at the time. Plus she didn't have the unfortunate hair cut of the Physical years or the sweatband.

She rode that wave pretty adeptly for several years. It wasn't until 1985 that she really went too far with the whole sexpot thing. The Soul Kiss album can probably be interpreted as her trying to keep up with Madonna, and it ended with People magazine exhorting her to "put her shirt back on." But with Totally Hot, it was kind of like the girl-next-door showing her wild side. And that is sexy.

oh i am not overly aware of Olivia apart from Xanadu and Grease of course. And Physical, which I love. And i even love the Kylie and SEB covers of it!! Still i should check her out - a large amount of Deb Gibson fans seem to love her too! Hope you enjoying the TKT novel!

I heard the ONJ had to be sewn into the Grease pants because they were so tight. But, the year of the reunion (What was it-- 25-30 years later?) she still fit into the pants!

Paul - you totally need to listen to some ONJ. I can provide!