Today is Father's Day and it's been a pretty good one so far. Nothing too terribly exciting, but it was good nonetheless. We finally made it back to church after what I swear is a two month absence. It was good but not quite what I was looking for. However, that's the chance you take when you're Unitarian. Since there is no such thing as a "typical" UU service, you just never know what you're going to get. We biked there and it rained on us on the way home, but the fact that I could bike there and back WITHOUT getting crushing chest pains tells me I'm in better shape than I thought (and it's a 4 mile ride round trip!)

Anna was so pumped about Father's Day. I kind of knew what I was getting from her. She had wanted to get me a hammock because she remembers hanging out in a hammock at my brother's house in Phoenix. Photographic evidence below: 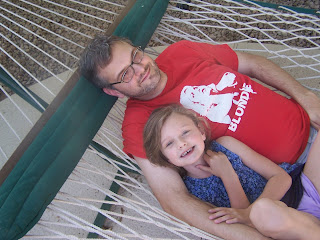 However, hammocks were quite expensive - 80 dollars, if you can believe it - plus we didn't really know where we would put it. So instead, she went with this: 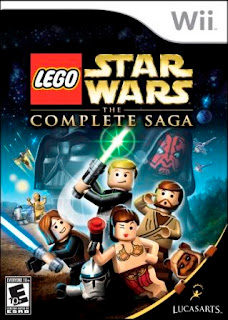 Wise move. It is harder than I anticipated, but we're learning slowly but surely.

I always feel a little bit guilty about Father's Day because it's like my family gets double-whammied from my birthday and then Father's Day right on its heels. Usually I tell them not to do much for Father's Day, but they don't really listen to me.

Happy Father's Day out there to all the other dads that read this blog - specifically Matt, Yuri, & TKT, but anyone else that I might be forgetting. And to my own father as well, who I know reads these pages of inane chatterings.

Hopefully Anna doesn't end up thumping me with an ashtray as I sit and demand my Father's Day cake. Because if that's the case, I'll have to come back a la Nathan Grantham. It's Father's Day, Bedelia!! Where's my cake?

Glad you are doing okay weather/house-wise!

I think Lego is brilliant for branching out into gaming at a point when they might have perished. Pity there wasn't a Lincoln Log Sim City!

Thanks for the shout-out, and I hope you had a great Father's Day too. (Looks like you did!)

Thanks, man! I wasn't around much for Father's Day, but it was good nonetheless.