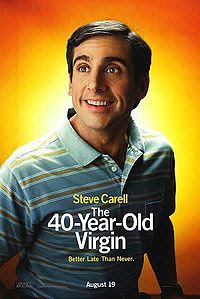 There are so many movies that I really, by rights, should have seen but for whatever reason, I missed. I have never seen Dirty Dancing all the way through. Same for Sixteen Candles and Pretty In Pink (must be a Molly Ringwald thing.) I've missed most of the Die Hard sequels, haven't seen a Bond movie since Goldeneye and couldn't be bothered by most of the Coen Brothers stuff. And perhaps most glaringly, I've mostly shrugged my shoulders at the oeuvre of Judd Apatow. Looking at his filmography, be he producing, directing or writing, I've missed most all of them. No Anchorman, no Talladega Nights, and until today, not even The 40-Year-Old Virgin.

So I decided enough was enough. The 40-Year-Old Virgin has been hanging out in perpetual limbo in my Netflix queue forever. I finally decided to move it to the top of the queue and even though I've had it for about a week, I just got around to watching it today. I knew quite a bit about it already and really, it's kind of one joke movie. But what the filmmakers did with that one joke was pretty amazing. That they managed to take what basically has the lifespan of a Saturday Night Live skit and turn it in to a 2 hour, 13 minute film was nothing short of astounding.

I'm not going to bother recapping the movie as I'm sure I'm the last person on Earth to actually see this movie. Suffice to say that Steve Carell is Andy who is the 40-year-old virgin. His co-workers at a Best Buy-ish type place find out about his lamentable state and make it their life's goal to help him shed his virginity. Funniness ensues, some predictable, some not so much.

I found the movie to be funny but not hilarious. I never once laughed out loud. I'm not a huge fan of humor that relies on embarrassing the protagonist so badly that I have to watch through my fingers. This is not a horror movie so I shouldn't be experiencing that mildly uncomfortable feeling in the pit of my stomach. I also think I might have found it funnier had I not known so much about it going into it. The scene with the chest waxing was more ridiculous than funny and knowing what was going to happen definitely took some of the funny out of it. Naturally, the best thing about this movie is Paul Rudd. The man steals every single movie he's in.

It was worthy my time but ultimately, I don't need to see it again. If it was only mildly funny the first time, I can't imagine it holding up well on repeat plays.

I have a feeling that I'll feel this way about The Hangover as well. Everybody has told me it's the funniest movie EVER (my sister would have a field day with that statement) but I just can't shake the feeling that I'll walk away from that underwhelmed like I did The 40-Year-Old Virgin.

I find I really enjoy going to funny movies in the theater. Hearing other people laugh, especially when the theater is packed with teenage boys makes the movie more humurous to me. I saw Superbad on a Friday night, and the male audience loved it. I've never heard people applaude after a movie before. When I watched it again by myself, it was not as funny.

I think you might be on to something there. Whenever I watch a comedy at home, especially if it's by myself, I am ALWAYS underwhelmed. I was starting to think that I was just getting old and crotchety. Maybe if I had seen this movie in the theater it would have been funnier. But then again, I'm always hesitant to pay 8 bucks for something that doesn't really NEED to be seen on the big screen.

Maybe if you re-watched it after you did a few shots ... !