It'll tumble for her

It all started with the mother of all crashes.

I was sitting at my computer catching up on blogs before heading to the kitchen to start thinking about getting dinner ready when, from the other room, I heard a most horrendous noise. It sounded like items sliding off a shelf. What began as a whisper soon became a roar as it became abundantly clear to me that something had gone seriously awry. I yelled out to Anna "Anna, what's going on?" only to hear her scream out to me for help.

I swear I was there in less than a second and could not believe my eyes. There was the entertainment center, on the floor face down. Everything had fallen out of it and Anna was underneath it crying and not able to move. I managed to lift up the entertainment center (which was the bulk of the weight) and pull her out from under it. After being pulled from the wreckage, she basically had the equivalent of an anxiety attack - talking about how she was afraid she had brain damage and that she was seriously injured. Her ability to walk and form coherent sentences pretty much ruled out brain damage and the fact that she could move pretty much everything made broken bones unlikely. But she was a bundle of nerves and acted like someone who had just had a near-death experience. This would be the point at which I would normally make a glib comment about the drama of being a 9-year-old, especially this one.

The truth is though, that it WAS a pretty big deal. She admitted that she'd been hanging on the entertainment center - something she's been told repeatedly not to do. I think she is unlikely to do it again. As Heidi said, she has a newfound appreciation for physics.

Our first job was calming her down. We got her into the tub and turned on her music and let her soak while we went down to assess the damage and try to put Humpty Dumpty back together again. The contents of the entertainment center included: a not-quite-year-old $800 television, a couple of DVD players, a VCR (yawn!), the Wii, various DVDs, the Roku box, and assorted knick-knacks (the Cher doll being the most cherished.) When we put it all together, we were looking at nearly $2000 worth of electronic equipment that had a very high likelihood of being ruined. I will admit that I was not at my best at this point. Once we hooked the TV back up and ascertained that yes, it still functioned, I started to pull myself back together a little bit.

Piece by piece, we tried out each piece of electronic equipment. My prediction early on was that anything that had a laser would be destroyed. But the DVD player worked, as did the Wii. We didn't even bother hooking the VCR back up - heaven only knows when the last time we used it was. The Roku box, I fear, took a fatal blow. I still can't make that work but fortunately, we have the Wii to allow us to do our Netflix streaming.

All in all, we majorly dodged a bullet on so many levels. Naturally, the most important thing is that Anna was virtually unharmed. She has a scrape on her arm along with a pretty colorful bruise from where she was pinned underneath the entertainment center but otherwise, she is mostly just shaken up. The hardest part was trying to move the entertainment center, thinking that my child had been seriously injured while she cried and said she was sorry and admitted to hanging on the entertainment center. At that point, I didn't give a shit about the electronics, I just wanted her out from under there and safe and unharmed. It shook me up a bit, I must say.

As Heidi and I were reflecting on the evening, we decided that even if everything on there had been broken and Anna would have been safe, it would have been a huge win. It's a cliche yes, but that doesn't mean it's not fucking true. The fact that, in the end, only the Roku box was rendered non-functional is just gravy. Oh, and Cher's microphone is still MIA.

Glinda, however, will never be the same. 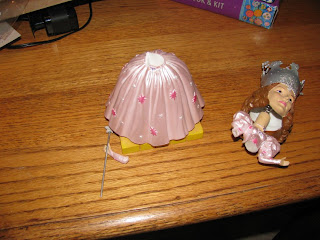 And here's a picture of the Humpty Dumpty, put back together again. 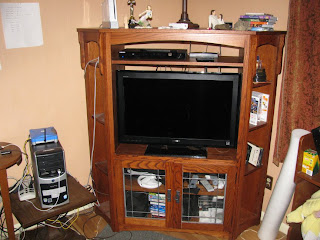 Not how I would have scripted the night had I been in charge, but hey, who ever said I got to be in charge?

Sheesh! Enough excitement to last for a while!

Regarding the Roku box...the power supplies on those things are notoriously flaky...if you can't get it to power on at all, it might be worth ordering another power supply from Roku...pretty cheap.

Yeah, if we have no more excitement of that variety ever again, it'll be far too soon for me. Like I said, just so glad that she's okay.

I'll mess around with the Roku over the next day or two and see if I can talk it into working. Although I will admit that Heidi's looked at the new and improved Roku boxes on the web site and is already wanting to upgrade!@ ;)

I'm so glad everything turned out OK and that worst part of the whole experience was the scare to Anna!

get a blu ray player instead of a roku your wii does everything a roku does and any good dvd player streams those same things if you don't want to use your wii and it uses a universal remote instead of another roku remote.

Glad to hear anna is ok:)

I'm so glad that Anna is OK. That was a big deal. And every father's fear.