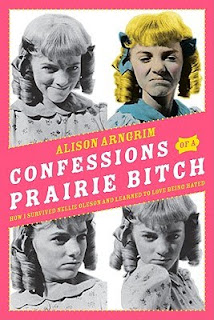 This book had me at the title. I was powerless to resist it. It pulled me in like a tractor beam on an alien spaceship.

Confessions of a Prairie Bitch by Alison Arngrim - better known as her alter ego Nellie Oleson of Little House on the Prairie fame - is one of those books that I lap up like a kitten at a milk bowl. I love a good dishy celebrity tell-all. It probably started with Joan Collins' Past Imperfect which I read in the 9th grade (this would be the point at which Heidi would say "and you turned out straight exactly HOW?") Since then, I have always loved those books that tear back the curtain on bits of the pop culture. There's always more going on than what we're allowed to see. And what could possibly be a more wholesome subject than Little House?

The book starts out with a bang as it describes Arngrim's hilarious encounter with a woman at the L.A. County Fair where she was signing autographs alongside other former child stars. I won't give it away, but her husband sums it up best by saying "we need to start bringing video cameras to these things." As it turns out, Nellie Oleson still elicits strongly negative reactions in people, even though Little House has been off the air for nearly 30 years. Everyone identified with Laura "Half-Pint" Ingalls and in so doing, everyone hated her nemesis, Nellie. I was not a religious watcher of Little House by any stretch of the imagination, but even I knew that Nellie was the spoiled brat foil to Laura's good-hearted eagerness.

Arngrim's life is fascinating and as expected, the bulk of the book encompasses the Little House years. The stories from the set are always interesting and are told in such a funny and readable way that even if you had no interest or exposure to the show, you still can't quit reading. She is a natural storyteller and relates incidents like Michael Landon's failure to wear underwear on the set and the enigma of Melissa Sue Anderson with great flair. She even explains why Carrie Ingalls falls into the grass in the opening credits of the show (you'll never guess) and talks at length about her life-long friendship with Melissa Gilbert.

But her life was not all great. Her youth also involves a heartbreaking story of sexual abuse at the hands of a family member. We also learn of her devastation at the death from AIDS of the man who played her Little House husband. His illness launched her into the next phase of her career - AIDS activism - which then led naturally to activism on behalf of abused children.

Confessions of a Prairie Bitch contains material that Arngrim uses in her stand-up act of the same name. What I loved is how at peace she seems to be with everything - with Nellie Oleson, her connection with the character and with her life in general. She has really lived her life and now she's happy. This was one of my favorite parts of the book.

"...I'm happy, I'm just that. There's no static on the line now. It's not 'I'm happy but...' or 'I'll be really happy when...' I am just ridiculously, stupidly happy. I am often cheerful to the point of being annoying as hell. I don't know if this is a sign of good mental health or recovery, or if it means I've finally snapped and just gone the rest of the way to completely batshit crazy."

Whatever it is, she's got it figured out. I can't recommend this book highly enough.

I so have to find this book! I'm not ashamed to admit that I was a huge Little House fan.

Mary, I totally thought of you when I was reading it. Mostly because you remind me of Nellie. ;)