Out with the old, in with the new

It's New Year's Eve 2010...well, not REALLY. As I write this it's a few days from now but the last thing in the world I will want to be doing on NYE (or have time for, for that matter) is blogging. In a few hours, my baby sister is getting married and we are going to party. This photo was taken earlier this week and as I said on Facebook, it's full of awesome. 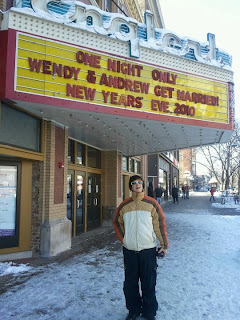 That's my new brother-in-law Andrew posing in front of the Englert Theater, the spot where tonight they will exchange their vows, say "I do" and have one hell of a NYE party.

Last year when I wrapped up 2009, the title of the post was "Good riddance to bad rubbish." I'm happy to report that 2010 has been a massive improvement on 2009. If it hadn't been, I daresay I would have been ready to throw in the towel. We didn't have an epic vacation (Heidi did, I didn't) and Heidi's been short on new releases as the year wraps up, but I look back on 2010 with much more satisfaction and happiness than I did at 2009. Although it got off to a rough start for me personally, I have to say that I'm in a better place than I have been in a long time. And while Heidi still struggles with chronic pain of a nebulous etiology, she seems to be more at peace with it overall and isn't letting it run her life like so many people with chronic pain seem to. Just like I've learned that my anxious brain is not the boss of me, she doesn't allow her chronic pain to be the boss of her. Oh sure, we both screw up now and then, but I think overall, things are much better than they were a year ago.

Toward the end of the year, I had a big revelation that this year, no one could accuse me of not living. It's so easy to get caught up in the day-to-day birth/school/work/death. I took chances and stepped outside my comfort zones. I had some great successes and some massive failures. I worked hard and played hard. I met new people. I was a wise man and amazingly foolish as well. In the end, I was human and I LIVED.

I don't really regret anything this year. Even the times I have behaved poorly or acted like an idiot have shaped me into something that I wasn't as 2010 dawned. As I always say, we're all an amalgam of all our experiences - good and bad and in between - so be careful what you wish away.